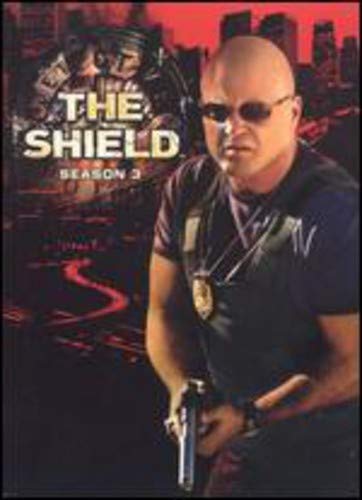 The Shield - The Complete Third Season The Shield - The Complete Third Season

Editorial Review
Dramatically speaking, the third season of The Shield is dysfunctional in the "best" sense of the word. Relationships fester in a quagmire of personal and professional conflict, and clashing agendas inspire some of finest episodes of this volatile series. Det. Mackey (Michael Chiklis) struggles to save his crumbling family (including two autistic children) while his strike team endures internal tensions over their secret stash of stolen drug money. Shane (Walton Goggins) clashes with teammate Tavon (Brian J. White) with near-fatal consequences, and his demanding fiancée tests his loyalty to Mackey. Capt. Aceveda (Benito Martinez) suffers unspeakable humiliation en route to city council promotion, engaging Wyms (CCH Pounder) in a battle of wills over proper command of "The Barn." Dutch (Jay Karnes) pursues the "cuddler rapist" case and confronts the dark side of his soul, while Danny (Catherine Dent) revives her career and is re-partnered with Julien (Michael Jace), who suppresses his homosexuality in a desperate quest for conventional marriage and family. After Lemon (Kenneth Johnson) attempts a drastic solution to their "money train" worries, the shaken strike team faces a deeply uncertain future.

As always, The Shield juggles multiple plotlines with relentless pacing and narrative economy, packing substantial character developments into all 15 of these action-packed episodes. This season's inclusion of a competitive decoy squad offers humor and professional sacrifice, and the pivotal David Mamet-directed episode "Strays" arrives at a shocking conclusion, with Mamet regulars Clark Gregg and Rebecca Pidgeon (Mamet's wife) giving outstanding guest-star performances. Series star Chiklis (whose pugnacious mug dominates the DVD packaging) makes his directorial debut on "Slipknot," and eight episodes include informative, entertaining commentaries by the principal cast and crew. A generous archive of deleted scenes illustrate the agonizing decisions required by the time constraints of episodic TV, and the making-of documentary offers an intimate look at the series' collaborative writing process. With major developments (including a new role for Glenn Close) in store for season 4, these episodes maintain the high standard of provocative drama that loyal Shield fans have come to expect. --Jeff Shannon

After scoring big with the money train,...

Last updated: August 08, 2020 at 10:09 EST. Pricing information is provided by the listed merchants. GoSale.com is not responsible for the accuracy of pricing information, product information or the images provided. Product prices and availability is subject to change. Any price and availability information displayed on amazon.com or other merchants at the time of purchase will apply to the purchase of the product. As always, be sure to visit the merchant's site to review and verify product information, price, and shipping costs. GoSale.com is not responsible for the content and opinions contained in customer submitted reviews.

Find similar products to the The Shield - The Complete Third Season