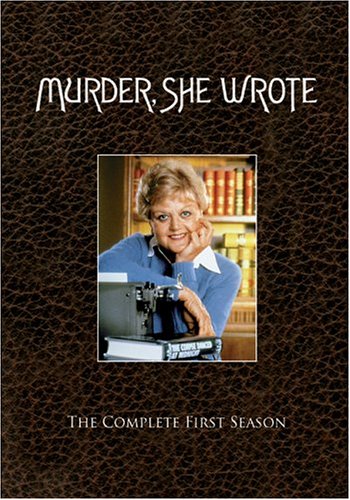 Editorial Review
There are two audiences for this DVD compilation of the first season of the enormously popular TV series Murder, She Wrote. The first enjoys the classic pleasures of the pre-forensics "whodunit," stories in which murder was not so much a crime as a logic puzzle; the joy here lay in how skillfully a writer could misdirect you. Murder, She Wrote--in which mystery writer Jessica Fletcher constantly stumbles across dead bodies in every setting imaginable, from a San Francisco drag show to a football field--doesn't have the elegance of an Agatha Christie or Rex Stout mystery, but the show was efficient at laying out its clues and cunningly used the audience's familiarity with television itself (the relative star power of the guests, the need for a dramatic high point before every commercial break, etc.) to mislead and manipulate. And of course Angela Lansbury, as Fletcher, was an ideal television presence: Warm and friendly, but with just a hint of the fierce, steely will she revealed in The Manchurian Candidate. Lansbury drove the show through an impressive twelve seasons (for which she received twelve Emmy nominations), plus multiple TV movies after its cancellation.

The other audience for Murder, She Wrote: The Complete First Season consists of viewers for whom names like Bert Convy, Dack Rambo, and Barbara Babcock send waves of guilty pleasure down their spines. The promotional materials for this boxed set make much ado about brief appearances by stars-to-be like Andy Garcia (who appears briefly as "1st White Tough" in the pilot TV movie) and Joaquin Phoenix (who's around 10 years old and still going by the name Leaf), but every single episode is a festival of B-, C-, and Z-grade celebrities from the 1970s and '80s: Claude Akins, Tom Bosley, Jeff Conaway, David Doyle, Samantha Eggar, Lynda Day George, Morgan Brittany, Belinda Montgomery, Gabe Kaplan, and Lyle Waggoner, just to name a handful. Some of these names may be forgotten, but their faces (and scenery-chewing performances) will spark a Proustian rush of television memories. --Bret Fetzer

Last updated: October 25, 2020 at 09:13 EST. Pricing information is provided by the listed merchants. GoSale.com is not responsible for the accuracy of pricing information, product information or the images provided. Product prices and availability is subject to change. Any price and availability information displayed on amazon.com or other merchants at the time of purchase will apply to the purchase of the product. As always, be sure to visit the merchant's site to review and verify product information, price, and shipping costs. GoSale.com is not responsible for the content and opinions contained in customer submitted reviews.

Find similar products to the Murder, She Wrote - The Complete First Season