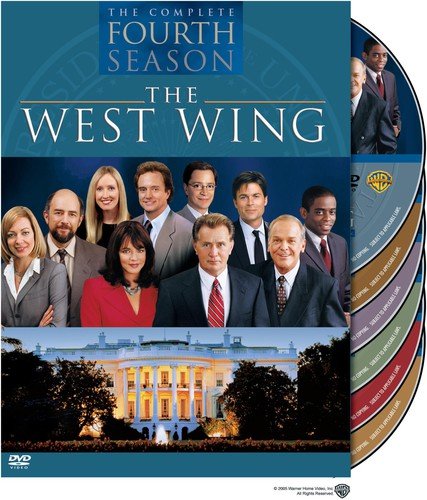 Editorial Review
The winning streak for this veritable show continues through its fourth year. As with many long-running series, The West Wing faces the inevitable--a cast member chooses to leave. But this show handles Rob Lowe's exit with such well-executed grace, a could-be-harmful experience (or at least sudden) is turned into an asset. The season begins with three staff members marooned in the heartland (played mostly for laughs) and ends with a dramatic cliffhanger even more powerful than the initial season's shooting. In between are 20 excellent episodes packed with the series' trademark wit and pace, and an uncannily ability to create excellent moments for the entire cast. The election nears and West Wingers brace for the final onslaught including a make-or-break debate. There's a horrible genocide in Africa changing the course of the Bartlett administration and a covert assassination with effects lingering throughout the season. There's also the now-annual flashback episode, this time to the first days at the White House (with another comforting appearance by Kathryn Joosten as Mrs. Landingham). The series also has its first episode set mostly outside the West Wing when C.J. (Alison Janney) goes back to Ohio for a high school reunion and visits her father (Donald Moffat) who is starting to feel the effects of Alzheimer's.

Lowe's Sam Seaborn picks a new fate at the spur of the moment and is eventually replaced by the very person whose verve he was swept up by--a harried, vastly intelligent campaign manager, Will Bailey (Josh Malina, best known for his work in creator Aaron Sorkin's previous show, Sports Night). He's an excellent fit for the West Wing, both fictionally and for the series. Part of the show's success belongs to the continuity, helped immensely by high-caliber guest stars continuing long runs on the show, including Mary-Louise Parker, John Amos, Marlee Matlin, Tim Matheson, Timothy Busfield, Lily Tomlin, Anna Deavere Smith, and Ron Silver (hey, that's a pretty good cast for their own show). One-time guest stars are also used to the fullest. Notice how a single-episoe appearance by Christian Slater (as a naval attaché who strikes Donna's fancy) turns into a three-episode arc. Matthew Perry delivers an Emmy-nominated performance in a key role in the season's final arc. This fourth season was capped by the departure of creator-writer Sorkin and producer-director Thomas Schlamme, plus another Emmy win for Best Drama, its fourth...

Last updated: January 15, 2021 at 08:46 EST. Pricing information is provided by the listed merchants. GoSale.com is not responsible for the accuracy of pricing information, product information or the images provided. Product prices and availability is subject to change. Any price and availability information displayed on ebay.com or other merchants at the time of purchase will apply to the purchase of the product. As always, be sure to visit the merchant's site to review and verify product information, price, and shipping costs. GoSale.com is not responsible for the content and opinions contained in customer submitted reviews.