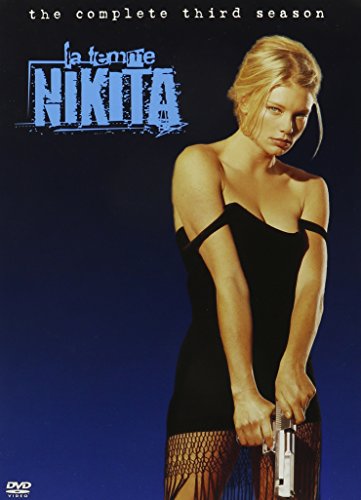 Editorial Review
Tensions between reluctant superspy Nikita (Peta Wilson) and her shadowy bosses at Section One couldn't be more rocky at the launch of La Femme Nikita's third season, and things definitely go from bad to worse. And it's not just Nikita who's having issues with her boss, Operations (Eugene Robert Glazer), but also Michael (Roy Dupuis), who experiences a major loss of power after being passed over for the Chief Strategist position ("Third Party Ripoff"), and fellow agents Walter (Don Francks) and Birkoff (Matthew Ferguson); the situation gets so bad that at one point, they consider jumping ship ("Slipping Into Darkness"). And if that's not enough complication and intrigue, Michael and Nikita's romantic inclinations finally take root, much to the consternation of Section One and Madeline (Alberta Watson), who attempts to nix their relationship, forcing the pair to meet behind her back ("Playing with Fire"). All this, plus a pair of deadly terrorist siblings ("Threshold of Pain"), and a modeling agency that fronts as a combo brothel/gladiator arena ("Hand to Hand"), adds up to another exciting season.

Season 3's six-disc set includes all 22 episodes, with commentary by Eugene Glazer on two shows--the season opener, "Looking for Michael," on which he's joined by director Jon Cassar, and the finale, "On Borrowed Time," which also features writer/production consultant Peter Lenkov. Glazer and Cassar also offer comments on a 13-minute battery of 10 deleted scenes from various episodes, while Cassar, Lenkov, and executive consultant Joel Surnow (24) are featured on an eight-minute featurette about production designer Rocco Matteo. And lest first-time viewers consider La Femme Nikita a laugh-free show, there's even a three-minute gag reel to lighten the mood. The season 3 set should be the perfect six-course meal to tide over devoted Nikita-ites--until the season 4 set, of course. --Paul Gaita

Description
"You're one of us now," Nikita is told. But has she truly abandoned her compassionate nature and become an unquestioning member of the soulless covert organization called Section One Or has she mastered the group's knack for deceit and cover-up so efficiently that she can beat Section at its own game The sleek, chic and powerful adventures of the agent codenamed Josephine continue in Season Three of the intrigue-filled five-year series that stars Peta Wilson in the title role. Season three is marked by the unveiling of Michael's secret life,...

Last updated: October 20, 2020 at 04:13 EST. Pricing information is provided by the listed merchants. GoSale.com is not responsible for the accuracy of pricing information, product information or the images provided. Product prices and availability is subject to change. Any price and availability information displayed on amazon.com or other merchants at the time of purchase will apply to the purchase of the product. As always, be sure to visit the merchant's site to review and verify product information, price, and shipping costs. GoSale.com is not responsible for the content and opinions contained in customer submitted reviews.