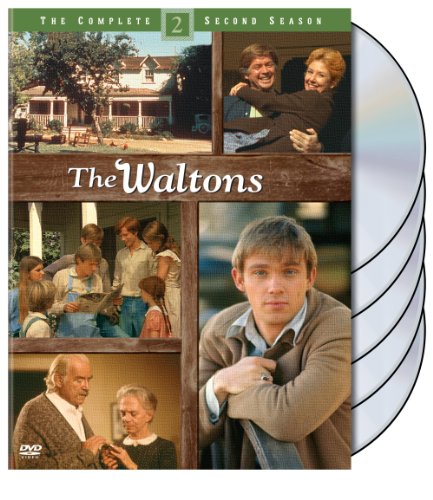 The Waltons - The Complete Second Season The Waltons - The Complete Second Season

Editorial Review
Year two of Earl Hamner's The Waltons still finds the original cast complete and the show humming along nicely on nostalgia for an earlier America, specifically the Depression-era 1930s, a time of sacrifice and family unity as The Waltons portrays it. The characters we came to know so well in season one (see The Waltons: The Complete First Season) continue to live in a spirit of cooperation and generosity, and with hope that a younger generation of Waltons will prosper and dream new dreams for everyone.

The 24 episodes included in this box set feature a number of very strong stories, including a handful of classics, all immersed in the series' typically old-Hollywood production values. (Several season two shows were directed by Waltons' star Ralph Waite.) Among the best is the premiere, "The Journey," in which the ever-noble, college-bound John-Boy (Richard Thomas) passes on a school dance and an important date to take an aging neighbor, Maggie Mackenzie (Linda Watkins), on a special, final journey. "The Separation" finds Grandpa (Will Geer) and Grandma (Ellen Corby) Walton feuding—even living apart--after the former crafts a secret plan to raise money to pay the family's electricity bill. (Their reconciliation is one of the series' most enjoyable and tender moments.) The memorable "The Thanksgiving Story" is a nail-biter in which John-Boy, facing a hopeful future as he awaits college and a visit from his girlfriend, endures a head injury in the family mill and must undergo surgery. Finally, "The Honeymoon" sees John (Waite) and Olivia (Michael Learned) finally taking their honeymoon after 19 years of marriage and seven kids. Throughout all the major storylines is a constant buzz of subplots concerning John-Boy's younger siblings—their joys and disappointments, first loves, accomplishments and relationships with one another. The Waltons never slows down, but it is capable of revealing the most delicate of feelings within shared or private moments. --Tom Keogh

Description
The welcome mat's out on Walton's Mountain. A year has gone by on Walton's Mountain. The Depression has deepened, but so have the love and respect that hold the Waltons together. Share good times and hard times with America's favorite family in this 5-disc set featuring all 24 Year Two episodes--including "The Thanksgiving Story," a poignant movie-length tale that won an Emmy Award for Best Writing in Drama (Series). This is the year John-Boy graduates from high...

Last updated: May 30, 2020 at 16:19 EST. Pricing information is provided by the listed merchants. GoSale.com is not responsible for the accuracy of pricing information, product information or the images provided. Product prices and availability is subject to change. Any price and availability information displayed on amazon.com or other merchants at the time of purchase will apply to the purchase of the product. As always, be sure to visit the merchant's site to review and verify product information, price, and shipping costs. GoSale.com is not responsible for the content and opinions contained in customer submitted reviews.

Find similar products to the The Waltons - The Complete Second Season