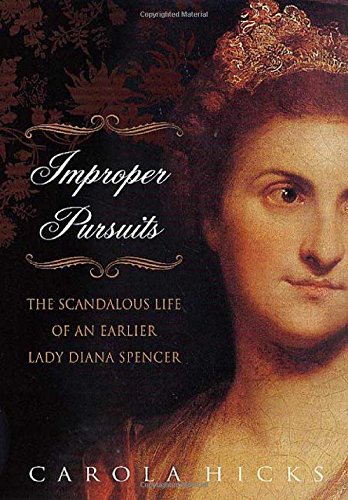 Editorial Review
With these words to Boswell, Samuel Johnson dismissed Lady Di Beauclerk, the wife of one of his closest friends, a woman of the highest rank, the daughter of a duke, who had forsaken her reputation, her place in society, her children, and her role as lady-in-waiting to the Queen for love.

Born Lady Diana Spencer in 1735, the eldest child of the third Duke of Marlborough, she was expected rigidly to follow a traditional path through life: educated in the fashion considered suitable for a girl, and married to a man of the appropriate rank for a duke's daughter. But finding herself in a desperately unhappy marriage to Viscount Bolingbroke, Lady Di overturned convention. She left her husband, maintained a secret relationship with her lover, Topham Beauclerk, hid the birth of an illegitimate child, and eventually helped to support herself by painting.

Lady Di Beauclerk was a highly gifted artist who was able to use her scandalous reputation as an adulteress, aristocratic woman to further her career as a painter and designer. She painted portraits, illustrated plays and books, provided designs for Wedgwood's innovative pottery, and decorated rooms with murals. Championed by her close friend Horace Walpole, whose letters illuminate all aspects of her life, she was able to establish herself as an admired artist at a time when women struggled to forge careers.

Carola Hicks provides an enthralling account of eighteenth-century society, in which Lady Di encountered many of the most eminent artistic, literary, and political figures of the day. Improper Pursuits is an absorbing study of a singular life.

Set Price Alert
Set Price Alert
Searching Stores
Found at 0 Stores
Last updated: February 20, 2020 at 08:22 EST. Pricing information is provided by the listed merchants. GoSale.com is not responsible for the accuracy of pricing information, product information or the images provided. Product prices and availability is subject to change. Any price and availability information displayed on amazon.com or other merchants at the time of purchase will apply to the purchase of the product. As always, be sure to visit the merchant's site to review and verify product information, price, and shipping costs. GoSale.com is not responsible for the content and opinions contained in customer submitted reviews.

Find similar products to the Improper Pursuits: The Scandalous Life of an Earlier Lady Diana Spencer