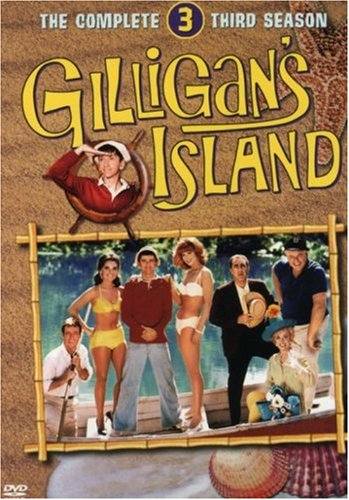 Editorial Review
Though Gilligan and his fellow castaways will remain forever marooned in syndication, the series' network run actually did come to an end in 1967 after a three-year run and 98 episodes. The final 30--which for Gilligan fanatics, include many of the show's best--are compiled in this three-disc set, along with input from creator Sherwood Schwartz. It's not known if Schwartz knew that the series was headed for cancellation, but he and the writers definitely appear to pour on the steam in season 3 to produce some of the series' most imaginative episodes, many of which break out of the island sets through dream sequences; these include the season kickoff, "Up at Bat" (after being bitten by a bat, Gilligan dreams of being a vampire); "Pass the Vegetables, Please" (the castaways gain extraordinary powers after eating radioactive produce); "The Producer: (Phil Silvers guests as a Hollywood director whom the castaways attempt to win over with a musical production of Hamlet); "The Invasion" (the discovery of a government briefcase leads to Gilligan dreaming about spy capers); "The Secret of Gilligan's Island" (a stone table leads to a caveman dream), and so on. A cruise ship's worth of engaging guest stars (Don Rickles, Rory Calhoun, Strother Martin) and amusing performances by the always-game cast make this final season a worthwhile addition to any Gilligan groupie's collection. And doubling its value is commentary by Schwartz on "The Producer" (arguably, one of the best episodes of the entire series), and a featurette about the show's impact on pop culture. --Paul Gaita

Last updated: August 07, 2020 at 21:43 EST. Pricing information is provided by the listed merchants. GoSale.com is not responsible for the accuracy of pricing information, product information or the images provided. Product prices and availability is subject to change. Any price and availability information displayed on amazon.com or other merchants at the time of purchase will apply to the purchase of the product. As always, be sure to visit the merchant's site to review and verify product information, price, and shipping costs. GoSale.com is not responsible for the content and opinions contained in customer submitted reviews.