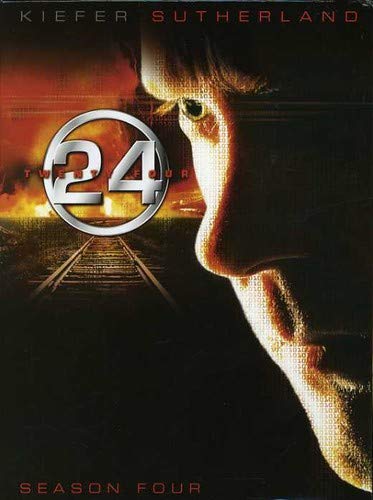 Editorial Review
Oh boy. Here we go again! Just another exciting day in the life of 24 super-agent Jack Bauer (Kiefer Sutherland). The season kicks off with a deadly terrorist strike resulting in the kidnapping of his new boss, the U.S. Secretary of Defense James Heller (William Devane). Although a fired, ex-employee of the Counter Terrorist Unit (CTU), it is no surprise who is going to shift into full gear to bring the terrorists to justice. However, it doesn't take the super-agent long to discover the kidnapping of his boss is part of a much larger plan, master-minded by Habib Marvan (Arnold Voslo) the middle eastern terrorist cell leader the US government has been trying to track down for years. Considered by many to be the best season of the first four, 24 - Season 4 is a definite departure from the first three seasons. For one, the cast is almost entirely new. Second, the pacing of each episode does not seem as frantic. There appears to be a shift from the reliance on plot-shifting cliff hangers (which in some ways dragged down the quality of Season 3), to a focus on complex, over-arcing, multiple storylines, albeit very violent. What may be missing in superficial action clichés is definitely compensated in a richer plot. That's not to say the show has slowed down, it's still amped up beyond anything else on TV, but compared to the previous seasons, 24 has gotten a lot smarter, and in turn, better. --Rob Bracco

Editorial Review
Emmy nominated for Best Drama series, 24 - Season 4 is considered by fans and critics to be the best season yet. Keifer Sutherland stars in his Emmy nominated role as Jack Bauer, 24 - Season 4 received the highest broadcast ratings of the series 4 year history.

DVD Features Include:
DISC 1:
7:00AM - 8:00AM Commentary by: Joel Surnow and Mary Lynn Rajskub. Deleted Scene Branched on this Episode: Ronnie roughs up suspect before joining conference room.

Last updated: January 16, 2021 at 15:37 EST. Pricing information is provided by the listed merchants. GoSale.com is not responsible for the accuracy of pricing information, product information or the images provided. Product prices and availability is subject to change. Any price and availability information displayed on ebay.com or other merchants at the time of purchase will apply to the purchase of the product. As always, be sure to visit the merchant's site to review and verify product information, price, and shipping costs. GoSale.com is not responsible for the content and opinions contained in customer submitted reviews.