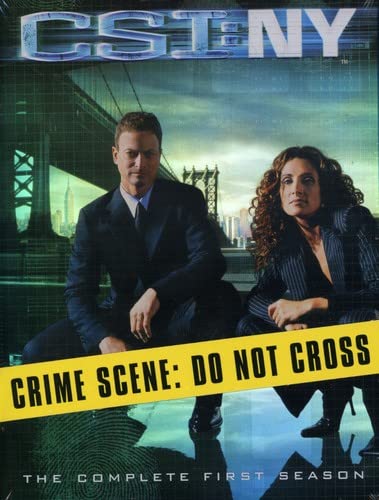 Editorial Review
What do you get when you transplant CBS's successful franchise to the Big Apple Cases involving sewer rats as witnesses, a victim whose head was slammed in a pizzeria oven, and murders of commodities traders, and--of course--a Red Sox fan. Fun as that may sound, CSI: NY is a bleaker, grimmer version of its Las Vegas and Miami cousins. The team is made up of a pleasantly New Yawk but indistinct cast of characters: Detective Stella Bonasera (Melina Kanakaredes), Detective Don Flack (Eddie Cahill), medical examiner Sheldon Hawkes (Hill Harper) and younger CSIs Danny Messer (Carmine Giovinazzo) and Aiden Burn (Vanessa Ferlito, who has since left the show). Their leader, Detective Mac Taylor (Gary Sinise), fares better as one of the few characters in the CSI franchise to have a back story (he lost his wife in the 9/11 attacks). But the formula has always worked best by avoiding personal storylines, thus any mention of this became nearly nonexistent. Sinise may be less intense than Miami's David Caruso, but lacks the wink-wink humor of the original's William Petersen. You kinda wish the whole crew would lighten up a bit, maybe go on a company retreat or something. Nonetheless, the franchise continues its trademark zooming cameras, gruesome crimes and way-cool forensic gadgets. New York makes an intriguing backdrop, but a message for producer Jerry Bruckheimer: We're saturated now. Please don't give us CSI: Omaha next. -- Ellen A. Kim

Description
CSI: New York, the third incarnation of the CSI: Crime Scene Investigation franchise and the spin-off of CSI: Miami, is a crime drama about forensic investigators who use high-tech science to follow the evidence and solve crimes in The Big Apple. Detective Mack "Mac" Taylor is a dedicated and driven crime scene investigator who believes that everything is connected and for everyone there is a story. He and his partner, Detective Stella Bonasera, a workaholic and a jack-of-all-trades, share a passion for the job. They lead a team of experts amid the gritty and kinetic city that never sleeps. Their team includes Danny Messer, a Brooklyn-born investigator with rugged good looks, an unflappable spirit and a colorful family history, and Dr. Sheldon Hawkes, a reclusive coroner who walked away from a promising surgical career after the traumatic loss of two patients. Joining them is homicide Detective Don Flack, an edgy, hardcore investigator with a quick wit, impressive forensic insight and limited patience...
[+] Read More

Last updated: January 22, 2021 at 08:44 EST. Pricing information is provided by the listed merchants. GoSale.com is not responsible for the accuracy of pricing information, product information or the images provided. Product prices and availability is subject to change. Any price and availability information displayed on merchants at the time of purchase will apply to the purchase of the product. As always, be sure to visit the merchant's site to review and verify product information, price, and shipping costs. GoSale.com is not responsible for the content and opinions contained in customer submitted reviews.