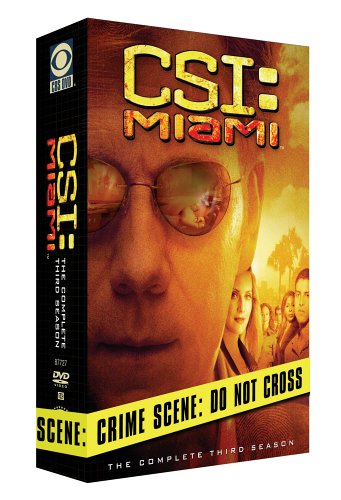 Editorial Review
Each locale in the CSI family has their own color palette: the original series is a dingy, seedy green, while New York is shot in gloomy blue hues. Miami, on the other hand, is a rich meld of citrus yellows and oranges, as bright as star David Caruso's hair. Yet with all the muscle-beach shots and balmy palm trees, grisly crime scenes are waiting to be dusted. The third season of CSI: Miami starts off with a bang (literally) as cast regular Rory Cochrane is killed in the line of duty. His death casts a shadow over the Miami crew, who have the courtesy to mention his name every few episodes or so. Instead of replacing Cochrane with a colorful new character, however, he's replaced by replicas of the other shows. One is young, inexperienced Ryan Wolfe (Jonathan Togo, bearing a resemblance to the original CSI's young, inexperienced Eric Szmanda). Also joining the cast full-time is Det. Yelina Salas (Sofia Milos), who brings a Raphaelite beauty to the cast a la Melina Kanakeredes from CSI: NY, but she has very little to do but receive longing glances from Horatio Crane (Caruso), who still harbors feelings for her. Too bad she's the widow of Crane's dead brother.

Miami's unusual cases include an axe murderer (Eric Roberts) with an apprentice; a Romeo who dies at a speed-dating event; a corpse whose skull must be boiled for processing; a party girl crushed to death by a snake; and a crime scene that involves a tsunami (yes, that's right.). Even pro skateboarder Tony Hawk turns up as--what else--a pro skateboarder who's killed while motion-capturing himself for a video game. The best thing in CSI: Miami is Caruso, who gets more yardage out of Horatio Crane than the other CSI franchise leads. As a detective, he isn't restricted to swabbing people's mouths but gets to pull out a gun and strong-arm suspects. He also may have the biggest love for over-the-top dramatic pauses on television ("Because. The evidence. Is. The. One. Who's. Talking."), but he's having fun doing it.--Ellen A. Kim

Last updated: September 23, 2020 at 18:15 EST. Pricing information is provided by the listed merchants. GoSale.com is not responsible for the accuracy of pricing information, product information or the images provided. Product prices and availability is subject to change. Any price and availability information displayed on amazon.com or other merchants at the time of purchase will apply to the purchase of the product. As always, be sure to visit the merchant's site to review and verify product information, price, and shipping costs. GoSale.com is not responsible for the content and opinions contained in customer submitted reviews.