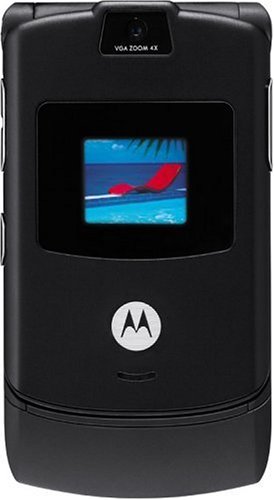 
When the Motorola RAZR V3 was launched last year, I think most everybody, including Motorola itself, was quite surprised by how popular the handset turned out to be, considering the asking price. Its slim profile and sleek silver colored metal body proved to be just too much of a temptation for the world, and people the world over jumped through hoops and over hurdles just to get one for their very own. Everybody was a movie star with one of these!
Black is beautiful.

Until, of course, Motorola gave 50 exclusive RAZR V3 BLK handsets to some real movie stars at the 77th Annual Academy Awards in February, 2005. All of a sudden, the silver RAZR lost some of its shine. But once again, it is time for the masses to rejoice. Motorola is making the RAZR BLK available to all.

Of course it isn't just the color that makes the RAZR V3 BLK such a desirable handset. One reason that people love it so is its size. It weighs only 3.35oz (95g), which is pretty light for a phone that has a largely metal body. At 3.86" x 2.17" x .57" (98mm x 55mm x 14.5mm) in size, it is actually thinner than most candy bar style phones on the market. It can be slipped perfectly into a shirt, suit, or pants pocket, as well as a purse, without being noticed.

There is so much more to the RAZR V3 BLK than its physical being, though. Certainly the primary purpose of any phone must be making phone calls, and in spite of its small stature, the RAZR V3 BLK managed a full 7 hours of talk time in our tests - a very respectable showing. A related bonus is the fact that you can charge the RAZR V3 BLK directly from your computer's USB port with the same type of mini-USB cable that you probably already have for your digital camera. That's one less power adapter to pack in the suitcase. Support for all 4 GSM frequency bands means that the RAZR will work in San Francisco and New York just as well as it will in Paris and London. The handset's internal antenna also proved to be quite capable, offering up very good reception in weak signal areas.

Of course some compromises had to be made to get all of this functionality into such a small package. The keypad, for example, is a very thin metal unit that offers less tactile...
[+] Read More

Last updated: January 27, 2021 at 14:45 EST. Pricing information is provided by the listed merchants. GoSale.com is not responsible for the accuracy of pricing information, product information or the images provided. Product prices and availability is subject to change. Any price and availability information displayed on merchants at the time of purchase will apply to the purchase of the product. As always, be sure to visit the merchant's site to review and verify product information, price, and shipping costs. GoSale.com is not responsible for the content and opinions contained in customer submitted reviews.