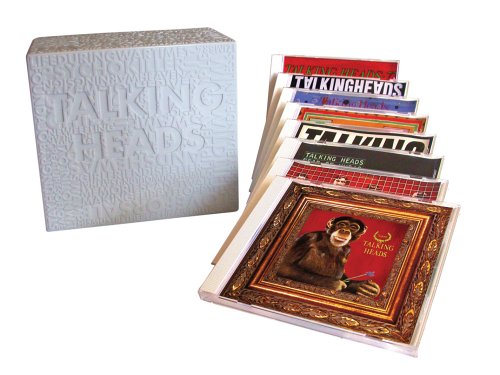 Editorial Review
Talking Heads' 30th anniversary is commemorated in typically artful style here, sonically upgrading their eight, era-defining albums via bonus-packed Dual Discs and encasing them in a molded white plastic box intricately embossed with the band's song titles. Each disc contains complete album tracks and bonus cuts remastered in High Resolution Stereo on its CD side, while the DVD programming on the flip offers up the audio tracks in expansive new 5.1 Surround Sound mixes, with all of the sonic upgrading personally supervised by Heads drummer Jerry Harrison. Those long overdue audio improvements alone would make it an attractive set, but fans of the band will find its wealth of bonus music (various B-sides and previously unreleased outtakes) and video (including a number of rare live clips seeing their first release here) supplements equally intriguing.

Bonus musical highlights include four rhythmically-charged, unfinished Remain in Light outtakes (including one that eventually evolved into the band's signature "Once in a Lifetime") that allow insightful glimpses into Eno's innovative production techniques on the album, alternate versions of "Cities," "Life During Wartime" and "Mind" from Fear of Music, a countrified version of "Thank You For Sending Me an Angel" from More Songs About.. and a strangely muted early version of another Heads staple, Speaking in Tongue's "Burning Down the House." An early demo of "And She Was" from Little Creatures demostrates that the whole of a glorius pop song can be the assembly of its simple parts. While the additional visual materials (especially the raw early performance clips) are a welcome addition to the Heads' canon, they're also something of a tradeoff: a few of the band's videos are conspicuously absent, including Remain in Light's "Once in a Lifetime." But overlooking a couple of the band's better known promotional moments in favor of revealing new musical treasures and vastly improved, state-of-the-art audio scarcely blunts the appeal of this rewarding career overview. -- Jerry McCulley

Album Description
Formed in the mid-70's by art school chums David Byrne, Chris Franz, and Tina Weymouth-and ex-Modern lover Jerry Harrison-Talking Heads rose out of the CBGB punk crucible and proved themselves one of the most artistically adventurous and influential bands ever. Their visionary, polyrhyhmic sound fused elements including rock, funk, and punk with diverse world beats, avant-garde minimalism,...

Last updated: June 07, 2020 at 04:56 EST. Pricing information is provided by the listed merchants. GoSale.com is not responsible for the accuracy of pricing information, product information or the images provided. Product prices and availability is subject to change. Any price and availability information displayed on amazon.com or other merchants at the time of purchase will apply to the purchase of the product. As always, be sure to visit the merchant's site to review and verify product information, price, and shipping costs. GoSale.com is not responsible for the content and opinions contained in customer submitted reviews.