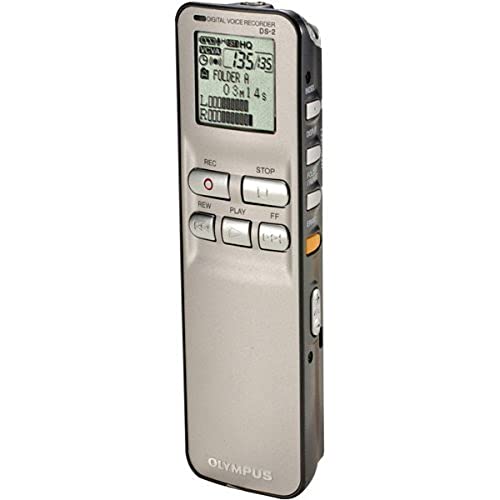 Features:Editorial Review
The advantages of digital voice recorders are numerous: superior sound, long recording times, and the convenience of built-in memory (much handier than hauling around several microcassettes). Enter the high-performance Olympus DS-2, which makes professional interviewing and dictation easy and efficient. With 64 MB of internal memory delivering up to 22 hours of total recording time in Long Play mode, the device is great for archiving long meetings or lectures, or for researching huge projects that require dozens of interviews. Users also have the choice of recording at several other speeds, including extreme high-quality modes that offer far less recording time (as little as one hour and five minutes) but much better audio resolution. The latter modes are more suitable for recording soft voices or when taking down complex song ideas--a process that's further assisted by the built-in stereo microphone designed to pick up all sides of a conversation with equal clarity.

The DS-2 is a breeze to use thanks to its straightforward front panel, from which users can quickly access or move files (the recorder comes with five folders, each capable of holding 199 files), set the alarm, or change the recording mode. Multitasking users will also delight in the voice activation function, which enables hands-free recording--a must when you're busy taking notes. Voice activation also saves battery life by powering off when no sound is detected. And when you just don't have time to attend to the details on the spot, you can set the DS-2 to record automatically over a fixed span. Simply enter the start and end times and the timer function is ready to go.

And though the DS-2 is primarily a recorder, the package comes with DSS Player software for editing and archiving files. The software offers a nice way to delete long silences, eliminate small talk, or combine two small but related passages into one large statement. Users can then transfer the files (they record in high-compression DSS and WMA formats) to a PC or Mac via the included USB docking station and cable. Once transferred, you can save...

Last updated: June 01, 2020 at 07:22 EST. Pricing information is provided by the listed merchants. GoSale.com is not responsible for the accuracy of pricing information, product information or the images provided. Product prices and availability is subject to change. Any price and availability information displayed on amazon.com or other merchants at the time of purchase will apply to the purchase of the product. As always, be sure to visit the merchant's site to review and verify product information, price, and shipping costs. GoSale.com is not responsible for the content and opinions contained in customer submitted reviews.