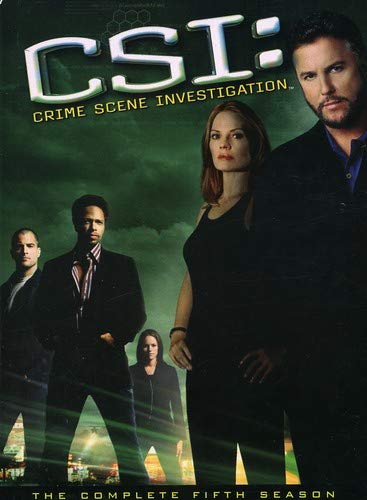 Editorial Review
Relaxing at the top of the Nielsen ratings, C.S.I. Crime Scene Investigation: The Complete Fifth Season stretched its legs a little to wander into the more grisly, more disturbing, and altogether more personal. "Down the Drain" showed the first overt romantic moment--in the form of a near-kiss--between Catherine Willows (Marg Helgenberger) and Warrick Brown (Gary Dourdan), which was discussed at length in the commentary and behind-the-scenes featurette as "a big moment." After that tease, the series pulled back and plunged into some of its most disturbing crimes yet. In "King Baby," a wealthy, middle-aged murder victim turns out to have lived as a baby, complete with adult-sized nursery; in "4x4," a personal trainer's face is eaten away from the inside out due to toxic mold in his house; in "Compulsion," a teen boy kills his younger brother for revealing that the older brother wets the bed.

The biggest change in this season is an HR one: new director Conrad Ecklie (Marc Vann) splits up the team, making Willows a shift supervisor and causing friction between she and Sara Sidle (Jorja Fox). He also adds a new member, Sofia Curtis (Louise Lombard), to banter with Gil Grissom (William Petersen)'s team. The move doesn't dampen the show's pace, as most cases break the team into twosomes anyway. But it does add a new villain in Ecklie, all politics and PR versus Grissom's heart to protect his team. Meanwhile, other cases dig deeper into the personal demons of Sidle and Willows; and the season finale, a slam-bam two-parter handily directed by Quentin Tarantino, focuses on the kidnapping of Nick Stokes (George Eads), buried alive with fire ants. This episode, the most emotionally charged yet, brings the entire team together and shows why it's still the No. 1 show on television. --Ellen A. Kim

Last updated: September 30, 2020 at 20:52 EST. Pricing information is provided by the listed merchants. GoSale.com is not responsible for the accuracy of pricing information, product information or the images provided. Product prices and availability is subject to change. Any price and availability information displayed on amazon.com or other merchants at the time of purchase will apply to the purchase of the product. As always, be sure to visit the merchant's site to review and verify product information, price, and shipping costs. GoSale.com is not responsible for the content and opinions contained in customer submitted reviews.