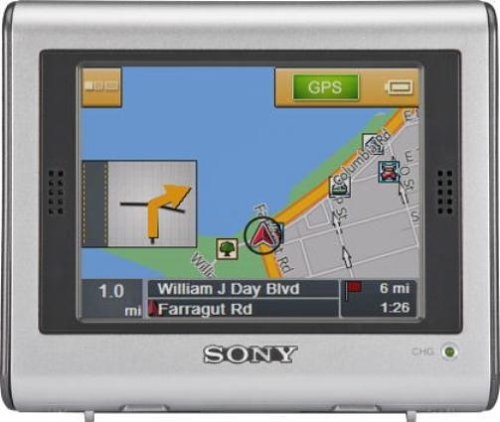 Features:Editorial Review
With the NV-U70 NAV-U system, Sony has decided to take the concept of the small, easy-to-use GPS device as a starting point and then add Sony touches like enhanced sound, a custom interface, and seamless, highly intelligent rerouting capabilities. Sony also developed its own proprietary GPS receiver for the NV-U70, enabling higher sensitivity and fast, accurate positioning.

The NV-U70 is small and unassuming, but it packs a highly visible, bright screen and crisp, clear voice instructions. The NV-U70's small, slender frame houses a high-brightness, 3.5-inch touchscreen display that features an anti-glare coating for viewing in all situations. In addition to resisting smudges from fingerprints, the monitor also sports a wide viewing angle so folks anywhere in the vehicle can see the screen clearly. Because light conditions change so much and so rapidly in a car, Sony has also built the unit with a highly intelligent brightness control system. First, the map color changes to account for day- and night-time viewing. Meanwhile, a light sensor on the side of the unit senses light level changes and brightens or dims the screen in eight sequential steps. The automatic dimmer won't respond to short-term brightness changes, like when you're just passing under bridge. Plus, the auto dimmer only works when the unit is on the cradle, so that when the device is being used on foot, you can't accidentally cover up the light sensor and change the brightness. In addition to the automatic functions, you can also easily control brightness manually. Yes, Sony thought of everything in the screen brightness department.

No matter where you are, you can quickly route yourself towards home. View larger. Sony knows audio and they've brought that expertise to the NV-U70. To help you hear instructions clearly, the unit features a two stereo speakers on the front of the housing and a ported, 1.6-inch woofer in the rear. The device contains 1 GB of memory, which is preloaded with a comprehensive map of the entire continental U.S. and Hawaii--making the NV-U70 ready to navigate out of the box. Additional map data, which includes maps of Puerto Rico, Alaska, and Canada, is...

Last updated: August 08, 2020 at 12:18 EST. Pricing information is provided by the listed merchants. GoSale.com is not responsible for the accuracy of pricing information, product information or the images provided. Product prices and availability is subject to change. Any price and availability information displayed on amazon.com or other merchants at the time of purchase will apply to the purchase of the product. As always, be sure to visit the merchant's site to review and verify product information, price, and shipping costs. GoSale.com is not responsible for the content and opinions contained in customer submitted reviews.