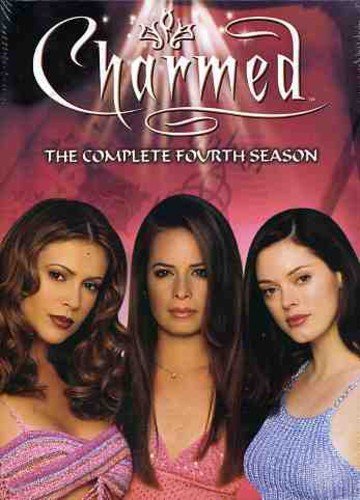 Editorial Review
Charmed: The Complete Fourth Season is a captivating story of big changes in the world of the Halliwell sisters. San Francisco witches Phoebe (Alyssa Milano) and Piper (Holly Marie Combs) grieve the loss of Prue (Shannen Doherty) at the same time they discover the existence of a fourth Halliwell sibling: Paige (Rose McGowan), offspring of the girls' late mother and a Whitelighter (thus making Paige part witch and part angel). Paige was raised as an adopted child, but has been aware of her sisters for awhile. Still, she's ambivalent about joining forces with them (despite having two powers instead of the usual one), and Piper--now the oldest of the surviving sisters, reluctantly taking over Prue's position as leader--is in no hurry to welcome Paige into the fold.

Blood and loyalty prevail, however, and soon Paige takes over Phoebe's old role as screw-up rookie, mangling potions and causing havoc (such as switching bodies with Phoebe at an inopportune time). But her strong survival sense, compassion, and ability to read people (she's studying to become a social worker) add a powerful new weapon to the Halliwell arsenal. Meanwhile, several key storylines from the third season carry over to this new year, notably the running drama concerning demon-with-a-soul Cole (Julian McMahon) and his ongoing battle to stay free of hell's wrath while maintaining dark powers. His romance with Phoebe leads them to become ruler and queen of the Underworld, where Phoebe's loyalty is tested and a demonic baby enters the picture. Piper and her husband, Whitelighter Leo (Brian Krause), deal with sorrow over Prue and frustration over not being able to have a child, and the sisters' police ally, Inspector Morris (Dorian Gregory), has to contend with an out-of-control boss bent on charging the Halliwells with a crime. All that and a witch-hunter and appearance by the angel of destiny, who offers to relieve the witches of their magical burden. The most impressive aspect of the fourth season is the way Doherty's loss isn't treated as a mere vacuum to be filled with a new body, but is taken as an opportunity to reinvent the show in several crucial ways. --Tom Keogh

Set Price Alert
Set Price Alert
Read Reviews
Searching Stores
Found at 0 Stores
Last updated: January 23, 2020 at 14:40 EST. Pricing information is provided by the listed merchants. GoSale.com is not responsible for the accuracy of pricing information, product information or the images provided. Product prices and availability is subject to change. Any price and availability information displayed on amazon.com or other merchants at the time of purchase will apply to the purchase of the product. As always, be sure to visit the merchant's site to review and verify product information, price, and shipping costs. GoSale.com is not responsible for the content and opinions contained in customer submitted reviews.

Find similar products to the Charmed - The Complete Fourth Season