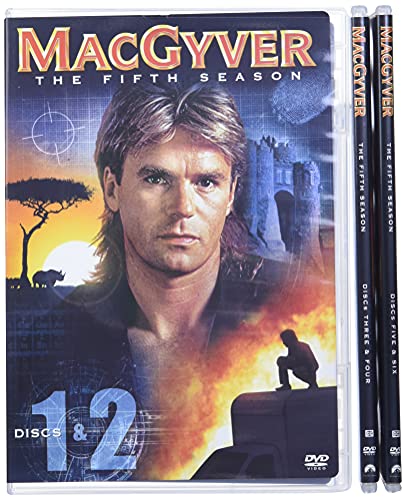 Editorial Review
Desperate times call for desperate measures--and the desperate will stop at nothing to get MacGyver's attention. In the fifth season premiere ("Legend of the Holy Rose"), an old friend releases his houseboat from its moorings--while he's in it. Four episodes later ("Halloween Knights"), an old enemy relieves his boat of its belongings. It works, of course. Mac lives to help people in need, even if those people include obnoxious archeology professor Zoë (Lise Cutter), who enlists his aid in tracking down an ancient artifact, and the mysterious Murdoc (Michael Des Barres), who does the same to rescue his kidnapped sister. Joining forces with arch-enemy Murdoc marks a break with previous seasons. Otherwise, the fifth features the same resourceful secret agent as the first four (though he’s relying on those inventive "MacGyverisms" less often as the series continues). MacGyver (Richard Dean Anderson) still travels the world on behalf of the Phoenix Foundation, while reporting to supportive superior Pete Thornton (Dana Elcar). As before, he goes it alone: no gun, no back-up, no wisecracking sidekick--not counting reckless rogue Jack Dalton (Bruce McGill), who drops by on occasion to shake up MacGyver's well-ordered world.

Aside from a greater interest in socially conscious causes, like the protection of endangered species, the 1989-1990 season also breaks with the past by an episode set in the Old West ("Serenity") and another set in the afterlife ("Passages"). In the former, Jack and Penny (Teri Hatcher in her final appearance) return as prototypes for their present day characters. Murdoc returns, as well--this time wearing a black hat. In the latter, Grandpa Harry (John Anderson) bids adieu. Other fifth year guests include Blossom’s Mayim Bialik ("Cease Fire," "Hearts of Steel"), The Exorcist’s Linda Blair ("Jenny's Chance"), and Jerry Maguire’s Cuba Gooding Jr. ("Black Rhino," "Serenity"). --Kathleen C. Fennessy

Set Price Alert
Set Price Alert
Read Reviews
Searching Stores
Found at 0 Stores
Last updated: January 23, 2020 at 16:15 EST. Pricing information is provided by the listed merchants. GoSale.com is not responsible for the accuracy of pricing information, product information or the images provided. Product prices and availability is subject to change. Any price and availability information displayed on amazon.com or other merchants at the time of purchase will apply to the purchase of the product. As always, be sure to visit the merchant's site to review and verify product information, price, and shipping costs. GoSale.com is not responsible for the content and opinions contained in customer submitted reviews.