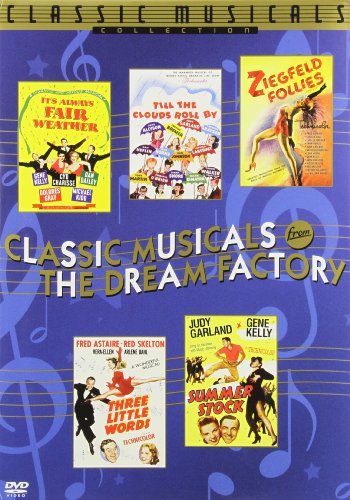 Ziegfeld Follies / Till the Clouds Roll By / Three Little Words / Summer Stock / It's Always Fair Weather
Editorial Review
Classic Musicals from the Dream Factory is a five-film collection of enjoyable but not-quite-top-tier movies from MGM's peak period between the mid-1940s and mid-'50s. The best films are the two with Gene Kelly. In Summer Stock (1950), he teams with Judy Garland in a traditional "let's put on a show" setting. Garland was in her last MGM film, but she shares a tap duel with Kelly and performs one of her most famous routines, "Get Happy" in a black jacket and fedora. It's Always Fair Weather (1955) features Kelly alongside Dan Dailey and Michael Kidd as three GIs who return from the war, a plot reminiscent of On the Town, another Kelly collaboration with Stanley Donen. The songs aren't much, but highlights include the three GIs' trash-can-lid dance, Cyd Charisse's solo supported by a crew of boxers, and Kelly's number on roller skates, "I Like Myself." Ziegfeld Follies (1946) follows the format of a revue, with a wisp of a plot (producer Florenz Ziegfeld is in heaven imagining his dream revue; he's played by William Powell, who had played the character 10 years earlier in The Great Ziegfeld) and a bunch of diverse musical numbers: Fred Astaire's dances with Charisse, Lucille Bremer, and Gene Kelly (their only screen collaboration till That's Entertainment II in 1976); a water number with Esther Williams; and songs by Judy Garland, Lena Horne, and Kathryn Grayson. Also following the revue format is Till the Clouds Roll By (1946), which features famous performances by Frank Sinatra ("Ol' Man River"), Lena Horne ("Can't Help Lovin' That Man"), and Judy Garland ("Look for the Silver Lining"). Interspersed among the numbers is a lackluster biography of songwriter Jerome Kern. For a more traditional songwriter biography, try Three Little Words (1950), starring Astaire and Red Skelton as Bert Kalmar and Harry Ruby, respectively, whose Tin Pan Alley and Broadway songs include "Who's Sorry Now," "My Sunny Tennessee," "I Wanna Be Loved by You," and the title tune. Vera-Ellen is an excellent partner for Astaire, and a young Debbie Reynolds appears as Boop-a-Doop girl Helen Kane.

All the discs are supplemented by new featurettes and classic shorts and cartoons. Deserving special mention is Till the Clouds Roll By, which has been available for years on inferior public-domain DVDs. This version has the best picture by far, and also...

Last updated: October 25, 2020 at 08:32 EST. Pricing information is provided by the listed merchants. GoSale.com is not responsible for the accuracy of pricing information, product information or the images provided. Product prices and availability is subject to change. Any price and availability information displayed on amazon.com or other merchants at the time of purchase will apply to the purchase of the product. As always, be sure to visit the merchant's site to review and verify product information, price, and shipping costs. GoSale.com is not responsible for the content and opinions contained in customer submitted reviews.