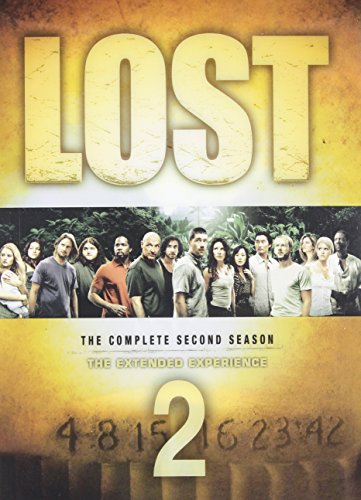 Product Description
4, 8, 15, 16, 23, 42. Push the button and prepare to be blown away by the groundbreaking television event USA Today calls "TV's best series." The multiple Emmy(R) Award-winning drama reaches new heights in its spectacular second season as the survivors of Oceanic Flight 815 discover they are not alone in their battle against "The Others," and a contested decision to open the hatch reveals a new realm of mystery and intrigue. Prepare yourself for the DVD experience of Season Two, complete with over 8 hours of original bonus material you can't see anywhere else -- including unaired original flashbacks -- and you'll discover for yourself why "everything happens for a reason."

Editorial Review
What was in the Hatch The cliffhanger from season one of Lost was answered in its opening sequences, only to launch into more questions as the season progressed. That's right: Just when you say "Ohhhhh," there comes another "What" Thankfully, the show's producers sprinkle answers like tasty morsels throughout the season, ending with a whopper: What caused Oceanic Air Flight 815 to crash in the first place As the show digs into more revelations about its inhabitant's pasts, it also devotes a good chunk to new characters (Hey, it's an island; you never know who you're going to run into.) First, there are the "Tailies," passengers from the back end of the plane who crashed on the other side of the island. Among them are the wise, God-fearing ex-drug lord Mr. Eko (standout Adewale Akinnuoye-Agbaje); devoted husband Bernard (Sam Anderson); psychiatrist Libby (Cynthia Watros, whose character has more than one hidden link to the other islanders); and ex-cop Ana Lucia (Michelle Rodriguez), by far the most infuriating character on the show, despite how much the writers tried to incur sympathy with her flashback. Then there are the Others, first introduced when they kidnapped Walt (Malcolm David Kelley) at the end of season one. Brutal and calculating, their agenda only became more complex when one of them (played creepily by Michael Emerson) was held hostage in the hatch and, quite handily, plays mind games on everyone's already frayed nerves. The original cast continues to battle their own skeletons, most notably Locke (Terry O'Quinn), Sun (Yunjin Kim) and Michael (Harold Perrineau), whose obsession with finding Walt takes a dangerous turn. The love triangle between Jack (Matthew Fox), Kate (Evangeline Lilly) and Sawyer (Josh Holloway), which...
[+] Read More

Set Price Alert
Set Price Alert
Read Reviews
Searching Stores
Found at 0 Store
Last updated: January 21, 2020 at 11:46 EST. Pricing information is provided by the listed merchants. GoSale.com is not responsible for the accuracy of pricing information, product information or the images provided. Product prices and availability is subject to change. Any price and availability information displayed on amazon.com or other merchants at the time of purchase will apply to the purchase of the product. As always, be sure to visit the merchant's site to review and verify product information, price, and shipping costs. GoSale.com is not responsible for the content and opinions contained in customer submitted reviews.

Find similar products to the Lost - The Complete Second Season