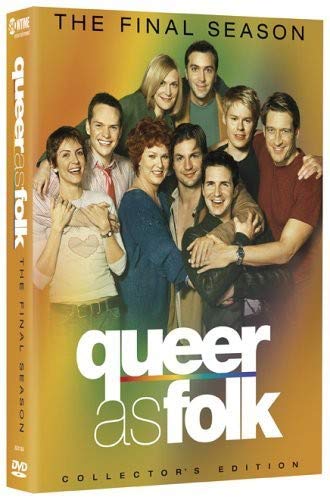 Collector's Edition
Editorial Review
Gay has rarely been so glamorous as in the American version of Queer as Folk. But the show's success rests on more than hard bodies and glossy, picture-perfect sex (though there's an abundance of that); this series gave its characters a multidimensional richness that rivals more high-profile programs like Six Feet Under or The Sopranos, while tackling an impressive breadth of social and political issues without ever (well, almost never) feeling preachy. The fifth and final season lays out its themes with authority: Alpha-gay Brian (Gale Howard) buys and revamps the sex club Babylon, declaring promiscuity and independence as a gay birthright, while Brian's oldest friend Michael (Hal Sparks, Talk Soup) embraces domesticity with his partner Ben (Robert Gant); the flamboyant Emmett (Peter Paige) finds success as a tv personality, only to find his persona may trap him in a stereotype; and Ted (Scott Lowell) grapples with body prejudices within the gay community. Meanwhile, the crumbling relationship of Mel (Michelle Clunie) and Lindsay (Thea Gill) takes a more troubling turn when Michael demands more rights as the father of their daughter.

Most tv series would take a topic like this last legal wrangle and stretch it over an entire season, but Queer as Folk is more ambitious; the writers recognize that the resolution of one problem is rarely the end of the story, that muddy consequences can be as dramatically compelling as head-to-head conflict. This aggressive and effective plotting, combined with the show's willingness to explore the complexities of every issue--be it assimilation or the coming out of a celebrity--results in an increasing emotional power as the series steamrolls towards its final episode. Some subplots can be silly (Brian has a ridiculous stud-off with a new hot guy in town), the dialogue can sometimes veer from wit to camp cliches, and the omnipresence of sculpted, muscular physiques is absurd and even a little alienating for some viewers, but Queer as Folk's strengths--the compassion and intelligence of the writers, the commitment and nuance of the acting--make this show a true television landmark and a pleasure to watch. And then, of course, there's all that graphic and lovingly photographed sex. Rosie O'Donnell and Cyndi Lauper make guest appearances, and Sharon Gless (Cagney & Lacey) continues her much-loved performance as Michael's mother, Debbie. --Bret Fetzer

Set Price Alert
Set Price Alert
Read Reviews
Searching Stores
Found at 0 Store
Last updated: February 18, 2020 at 15:10 EST. Pricing information is provided by the listed merchants. GoSale.com is not responsible for the accuracy of pricing information, product information or the images provided. Product prices and availability is subject to change. Any price and availability information displayed on amazon.com or other merchants at the time of purchase will apply to the purchase of the product. As always, be sure to visit the merchant's site to review and verify product information, price, and shipping costs. GoSale.com is not responsible for the content and opinions contained in customer submitted reviews.