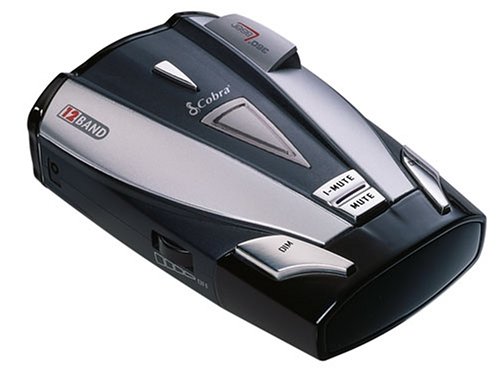 Editorial Review
Whether you commute to work or school on the freeway, drive for a living, or just like to go on an occasional recreational trip, the Cobra XRS-9330 Radar/Laser Detector is an invaluable addition to your motor vehicle. Designed for the convenience of 24-hour use, the XRS-9330 has an extra bright digital display that can be dimmed for nighttime driving. Measuring 4.40 x 2.70 x 1.30 inches and weighing just 4.8 ounces, the XRS-9330 can be set just about anywhere within easy view when you're driving, and then stored in your glove compartment when you're parked.

The XRS-9330 detects six different radar signals, including the Ku wavelength band that is widely used in Europe and that has been recently approved for use in the United States. In addition, the XRS-9330 is completely invisible to the VG-2 and Spectre radar detector detectors while it alerts you if either the VG-2 or the Spectre is in use in your area.

The XRS-9330 is also sensitive to four different laser signals, and with its LaserEye feature giving you a 360-degree detection range, you'll always be able to tell if you're driving through a surveillance area. And perhaps most importantly, for your own safety and the safety of other drivers sharing the road with you, the XRS-9330 detects two emergency alert systems to give you advance warning of road hazards, keeping you prepared when emergency vehicles are nearby. In addition to detecting the Safety alert system, the XRS-9330, like most of Cobra's Radar/Laser detectors, offers Cobra's exclusive feature of detecting the presence of the Strobe alert system, which emergency crews use to control traffic signals.

So get the Cobra XRS-9330 Radar/Laser Detector for your car or truck, and you'll be prepared for just about anything when you're behind the wheel.

Note: Radar detectors can be used without restriction in well over 40 states, but restrictions apply in a few states. Please check with your state department of motor vehicles or highway patrol if you have questions about whether there are restrictions in your area.

Last updated: April 06, 2020 at 09:48 EST. Pricing information is provided by the listed merchants. GoSale.com is not responsible for the accuracy of pricing information, product information or the images provided. Product prices and availability is subject to change. Any price and availability information displayed on amazon.com or other merchants at the time of purchase will apply to the purchase of the product. As always, be sure to visit the merchant's site to review and verify product information, price, and shipping costs. GoSale.com is not responsible for the content and opinions contained in customer submitted reviews.