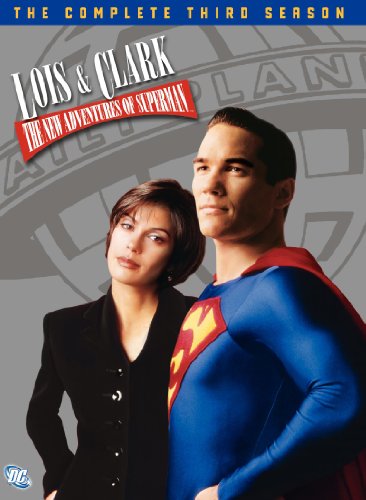 Editorial Review
Lois & Clark presents a more upbeat world than the one depicted in Superman Returns. In Bryan Singer's big screen version, Clark loses the girl before the credits even begin. In the third season premiere of the ABC series, however, Clark (Dean Cain) proposes to Lois (Teri Hatcher). Before answering, she wants to know, "Who's asking, Clark or Superman" So, now he knows she knows (yet another difference). In either case, the answer is no...for now. In this episode, Bill Church (Peter Boyle) also informs Bill Jr. (Bruce Campbell) that now he'll be working for good rather than bad--which leaves Superman with little to do. That situation won't last long as the Churchs will soon be tossed in the clink and a new boss will take over Intergang. The Brylcreemed one is back in the business of saving Metropolis from the baddies. Meanwhile, a psychic named Star (Olivia Brown) moves in next door to Lois (and seems designed to add some rather dubious comic relief). Other episode highlights include "Ultra Woman," in which Shelley Long and Mary Gross transfer Clark's powers to Lois, and "Don't Tug on Superman's Cape," which spoofs I Love Lucy, Dragnet, and James Bond--with Hatcher (Tomorrow Never Dies) as "Miss Goodbottom."

Other points of interest: Both Cain and Hatcher penned episodes ("Virtually Destroyed" and "It's a Small World After All"), the title sequence changes in the third episode ("Contact") to reflect Hatcher's new hairstyle, and guest stars include future crime scene investigators Gary Dourdan ("Never on Sunday") and Emily Proctor ("Tempus, Anyone"). Most importantly, Lois finally gets back to Clark about that little question, setting the scene for next season's super-nuptials. Extras include a sneak peek at the Singer-produced doc, Look, Up in the Sky!, which explores all incarnations of the Man of Steel. -- Kathleen C. Fennessy

Description
This exciting, action-packed update of the DC Comics Superman captures the daring exploits of the mysterious visitor from another planet and brings the city of Metropolis to life. Originally aired in the 90's, this humorously romantic action/adventure hour-long series puts a modern twist on the time-honored, legendary superhero. Bringing to life the comic book characters Clark Kent (Dean Cain), his superhuman alter-ego, Superman and Lois Lane (Teri Hatcher), this hit 90s TV series tells the tale of one of the most unrequited romances of all time.

Last updated: January 22, 2021 at 07:21 EST. Pricing information is provided by the listed merchants. GoSale.com is not responsible for the accuracy of pricing information, product information or the images provided. Product prices and availability is subject to change. Any price and availability information displayed on merchants at the time of purchase will apply to the purchase of the product. As always, be sure to visit the merchant's site to review and verify product information, price, and shipping costs. GoSale.com is not responsible for the content and opinions contained in customer submitted reviews.