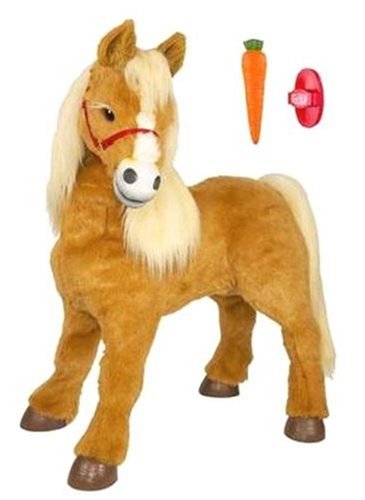 Features:Product Description
Butterscotch Pony is a life-sized plush pony that loves to be groomed and cared for. She has many features similar to that of a real pony, including moving eyes, ears and head, soft fur coat and a swishing tail. Through sensors, Butterscotch can feel when she is being groomed and will move her head toward you, and may whinny and snort. The more you touch her, the happier she becomes. Just like a real pony, Butterscotch loves carrots and can be "fed." Hold the pretend carrot to her face, and she will open her mouth for it, or shake her head "no" if she has had enough. Kids can even sit on Butterscotch and she will make walking sounds. Measures 20" x 39" x 42". Requires 6 "D" batteries (not included). Holds up to 80 pounds.

Editorial Review
.caption { font-family: Verdana, Helvetica neue, Arial, serif; font-size: 10px; font-weight: bold; font-style: italic; } ul.indent { list-style: inside disc; text-indent: -15px; } Winner of the 2007 T.O.T.Y. Award for Best Girls Toy of the Year, the Hasbro FurReal Friends Butterscotch Pony seeks to fulfill every little girl's dream of having her very own pony. Butterscotch is a miniature Shetland pony, and will react to your child's loving care in incredibly realistic ways. More than three feet tall, she will even allow kids to sit on her for a pretend ride. Recommended for ages 4 through 10, Butterscotch Pony will quickly become any little girl's most precious companion.

The Shetland Pony stands over three feet tall and acts just like a real horse.

Much like a real pony, Butterscotch loves to be groomed and fed.
View included items.Just Like a Real Pony
With Butterscotch, your girl will feel like she is interacting with a living, breathing pony. Butterscotch is soft to the touch, with a fur coat and mane that feel just like a real pony. Her markings and color are modeled after a Shetland pony. Butterscotch also has built-in sensors all over her body, which enable her to respond to children in amazingly lifelike ways. If talked to, she will cock her head toward the speaker quizzically and blink her eyes. She will also react to petting, showing her enjoyment by rubbing her head against your child, twitching her ears, and...

Last updated: June 06, 2020 at 05:51 EST. Pricing information is provided by the listed merchants. GoSale.com is not responsible for the accuracy of pricing information, product information or the images provided. Product prices and availability is subject to change. Any price and availability information displayed on amazon.com or other merchants at the time of purchase will apply to the purchase of the product. As always, be sure to visit the merchant's site to review and verify product information, price, and shipping costs. GoSale.com is not responsible for the content and opinions contained in customer submitted reviews.