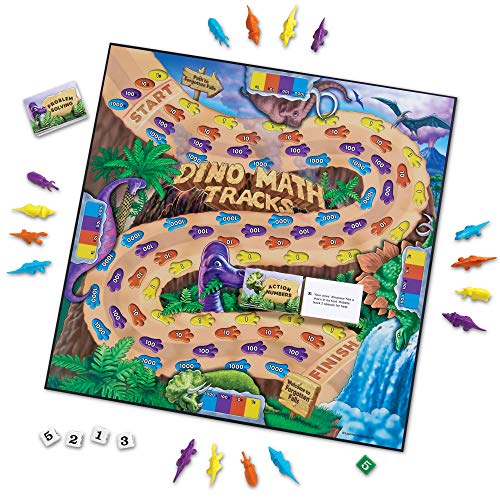 Editorial Review
The Dino Math Tracks game (winner of several prestigious awards, including an Oppenheim Toy Portfolio Gold Seal) is a race around the rainbow with a pack of pintsize, prehistoric pals. An unusual spin on a typical roll-the-dice-and-move game, it spotlights the mathematical concept of place value and gives kids reinforcement in what makes our base-10 number system tick. Each player is allotted one dinosaur for each of the four tracks (the tracks are labeled 1s, 10s, 100s, and 1000s). To play, a player rolls four dice to create a 4-digit number and then moves his or her prehistoric posse to the appropriate 1s, 10s, 100s, and 1000s places. Problem-solving strategies are honed as players scurry to get all four miniature mammoths or tiny triceratops into the dino haven, ahead of the other players' thundering herds. But look out! In the race to dino utopia, it's easy to get bumped by a baby brachiosaurus!

The Dino Math Tracks game provides multiple levels of play for a variety of ages. At the simplest level (perfect for a first-grader who knows Arabic numerals and one-to-one correspondence), kids use only the place track for the 1s. Later, cards with simple problems are introduced ("Stuck in a tar pit! Move your 10s dino back two spaces!"). At the most advanced level, players might encounter a question like this: "Your 10s dinosaur forgot its pants, so it went back 15 to get them. Then it hurried forward 25. How far did it get Move that many." Young players will find the 2-inch, spunky vinyl dinosaur playing pieces irresistible. The game offers plenty of opportunities for friendly competition and brain bending--not to mention lots of nonthreatening practice at addition and subtraction. --Julie Ubben

Last updated: June 02, 2020 at 16:58 EST. Pricing information is provided by the listed merchants. GoSale.com is not responsible for the accuracy of pricing information, product information or the images provided. Product prices and availability is subject to change. Any price and availability information displayed on amazon.com or other merchants at the time of purchase will apply to the purchase of the product. As always, be sure to visit the merchant's site to review and verify product information, price, and shipping costs. GoSale.com is not responsible for the content and opinions contained in customer submitted reviews.