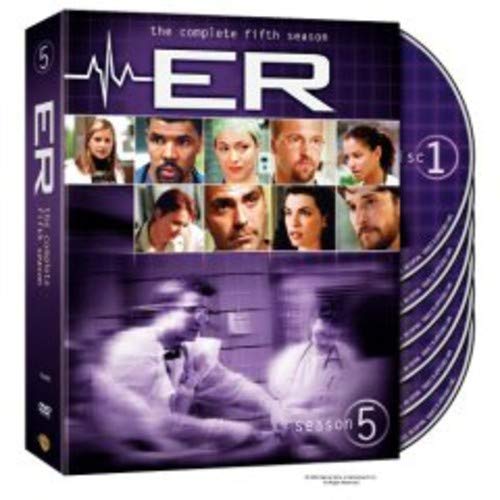 Editorial Review
ER's fifth season was marked by the departure of one of the series' core characters and the entry of a new one. It opens with third-year medical student Lucy Knight (Kellie Martin) being introduced to the layout and members of the ER (we learn Maria Bello's character, Anna Del Amico, has left), which also serves as a shorthand way of introducing new viewers to the series. She makes a strong impression immediately and reminds John Carter (Noah Wyle) of himself, but before long the two find themselves at odds. Elizabeth Korday (Alex Kingston) has to start over as an intern in order to stay at County General and in the U.S., and gradually ends her relationship with Peter Benton (Eriq La Salle), who learns that his son is deaf. Kerry Weaver (Laura Innes) tries for the position of full-time chief resident, but is beaten out by an East Coast hotshot, Amanda Lee (Mare Winningham), who turns out to have an interest in Mark Greene (Anthony Edwards). Greene starts to ride along with the paramedics, and Doug Ross (George Clooney) has settled down (finally) with nurse Carol Hathaway (Julianna Margulies). He's still on probation from the risky detox procedure he used in the fourth season, but he seems to be on his best behavior until a mother (Valerie Mahaffey) brings in her ALD-stricken son. Ross breaks protocol again but this time threatens to bring down the whole ER with him in the season's high point, the climactic two-parter "Storm." Other cast members and guest stars include Penny Johnson (24) as a nurse practitioner who joins Hathaway's clinic, Djimon Honsou as a Nigerian custodian with a secret, Marlee Matlin as Benton's sign language teacher, and TV Tae-Bo instructor Billy Blanks as a Tae-Bo instructor who teaches Lucy how to deliver a good swift kick. --David Horiuchi

Description
Created by best-selling author Michael Crichton, this series centers on the medical personnel in the emergency room of a Chicago county hospital. ER tracks the inner workings of County General Hospital, a Level One Trauma Center where heroic doctors and nurses are faced with life-and-death decisions on a daily basis. In its fifth season, third-year med student, Lucy Knight joins the team in the ER and kindles a relationship with Dr. Carter, Dr. Corday starts her career over as an intern, Dr. Green watches helplessly as his family is torn apart, Dr. Ross leaves the ER for a new job and the whole time the ER is being run by an imposter!!

Last updated: June 03, 2020 at 13:04 EST. Pricing information is provided by the listed merchants. GoSale.com is not responsible for the accuracy of pricing information, product information or the images provided. Product prices and availability is subject to change. Any price and availability information displayed on amazon.com or other merchants at the time of purchase will apply to the purchase of the product. As always, be sure to visit the merchant's site to review and verify product information, price, and shipping costs. GoSale.com is not responsible for the content and opinions contained in customer submitted reviews.

Find similar products to the ER - The Complete Fifth Season