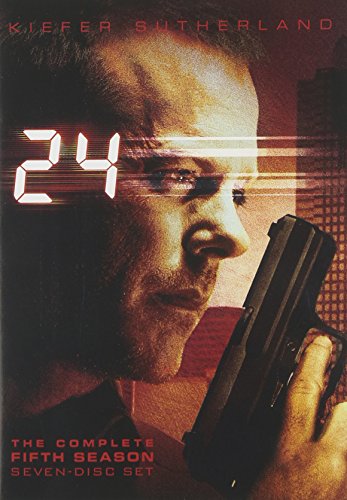 Pivoting on a declaration of martial law and a mysterious cabal of unnamed conspirators, "Day 5" shocked even loyal 24 fans with a high body count including several important supporting characters. It all adds up to an exceptional season that earned Sutherland a well-deserved Emmy (for Outstanding Lead Actor in a Drama Series), equally deserving Emmy nominations for Itzin and Sharp, and an Emmy win for co-executive producer Jon Cassar's direction of the riveting season premiere. And while the breathtaking twists of 24 don't always hold up to intense scrutiny, these 24 episodes (running about 43 minutes each) are tightly written and flawlessly directed with an involving emphasis on thriller plotting and dramatic focus on the complex and operatically tragic relationship between President Logan and his traumatized wife. Add it all up, and you've got an addictive reason to look forward to season 6. --Jeff Shannon

Last updated: May 31, 2020 at 00:53 EST. Pricing information is provided by the listed merchants. GoSale.com is not responsible for the accuracy of pricing information, product information or the images provided. Product prices and availability is subject to change. Any price and availability information displayed on amazon.com or other merchants at the time of purchase will apply to the purchase of the product. As always, be sure to visit the merchant's site to review and verify product information, price, and shipping costs. GoSale.com is not responsible for the content and opinions contained in customer submitted reviews.