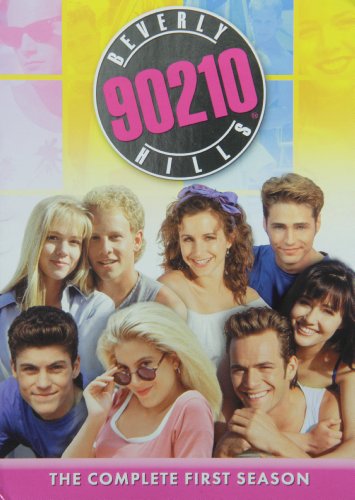 Beverly Hills, 90210 ran for 10 years. Though it would move away from issue-oriented episodes in the seasons to come--in the first, it takes on shoplifting, cheating, and date rape--without it, there would be no O.C., no Veronica Mars, etc. Just like the 1980s films of John Hughes (The Breakfast Club), it set the standard to which all others must be compared. As nice as it is to have the show on DVD, it should be noted that not all musical selections made the cut, i.e. "Music has been changed for this home entertainment version." Otherwise, this guilty pleasure remains as pleasurable as ever. --Kathleen C. Fennessy

Description
One of the definitive, landmark shows of the 1990s, "90210" quickly became an important fixture on the FOX and in the popular discourse of adolescents and young adults. The first season's main characters, Dylan, Kelly, Donna, Steve, David, Andrea and twins Brandon and Brenda all attended West Beverly Hills High School. Brandon and Brenda Walsh and their parents, transplants from Minneapolis, were the stable nuclear family with strong values; their home was a safe haven for the whole gang and the center of much of the drama. The show dealt...

Last updated: August 04, 2020 at 08:44 EST. Pricing information is provided by the listed merchants. GoSale.com is not responsible for the accuracy of pricing information, product information or the images provided. Product prices and availability is subject to change. Any price and availability information displayed on amazon.com or other merchants at the time of purchase will apply to the purchase of the product. As always, be sure to visit the merchant's site to review and verify product information, price, and shipping costs. GoSale.com is not responsible for the content and opinions contained in customer submitted reviews.