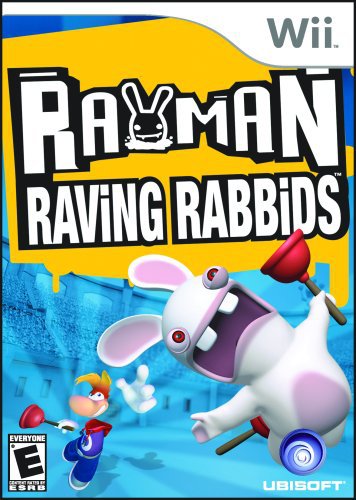 Features:Product Description
Rayman Raving Rabbids brings you back to the world of Rayman, just as it's being threatened by demonic rabbits! With the help of magical creatures, Rayman must battle to save his world from the bunnies. It's a great way for Rayman to punch his way onto a next-gen platforms!

Rayman Raving Rabbids is the edgiest and most off-the-wall gaming experience in the history of the Rayman franchise. This new Rayman game features the funniest, zaniest, wackiest antics ever when hordes of nasty bunnies invade Rayman's world. They enslave him, forcing Rayman to participate in a series of gladiator-like trials. In order to win his freedom, Rayman must entertain and outwit these crazed, out-of-control bunnies.

Beat the bad bunnies and become a superstar!

How many Raving Rabbids can you take out in 30 seconds View larger.

Multiplayer games are as fast as they are hilarious. View larger.

Welcome to a new generation of Rayman
You'd be hard-pressed to find a game with as much character as Rayman Raving Rabbids. From the creative minigames to the quirks of the bunnies, this game packs an immense amount of entertainment on one disc. It's rare in games that failing during a competition can bring you as much joy as actually succeeding, but Rayman Raving Rabbids does an admirable job of rewarding your failure with a large dose of comic screams, flying plungers and crossed eyes.

Of course, the point is to succeed and not let the bunnies laugh at your failure. Rayman Raving Rabbids may have a lot of style but it has very little plot. Each level consists of four minigame challenges and one "boss battle," so to speak. If you complete at least three of the minigames, the main gate opens, allowing you to take on a greater challenge. Once you play a minigame in the Story Mode, you unlock that minigame and can play it at any time and against friends.

Exercise your Wii Remote
Hand it to Ubisoft's development crew as they really took advantage of the Wii Remote and Nunchuk controllers' capabilities. Some minigames are as simple as twirling the Wii Remote like a lasso and pushing a button...

Last updated: April 10, 2020 at 13:41 EST. Pricing information is provided by the listed merchants. GoSale.com is not responsible for the accuracy of pricing information, product information or the images provided. Product prices and availability is subject to change. Any price and availability information displayed on amazon.com or other merchants at the time of purchase will apply to the purchase of the product. As always, be sure to visit the merchant's site to review and verify product information, price, and shipping costs. GoSale.com is not responsible for the content and opinions contained in customer submitted reviews.