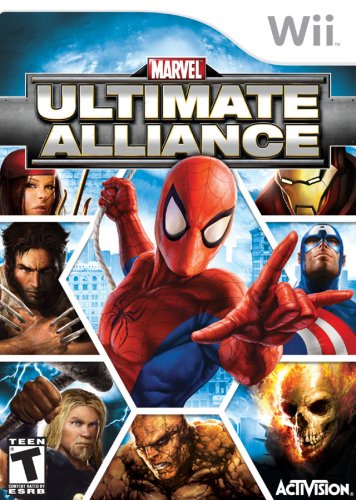 Marvel: Ultimate Alliance is an all-new action/RPG where players create their Marvel dream team from the largest roster of Super Heroes ever in an epic quest that will determine the fate of Earth and the Marvel universe. For decades, Earth's Super Heroes have opposed evil in their own cities, and on their own terms. But now, Dr. Doom and a newly reformed Masters of Evil - the greatest collection of Super Villains ever assembled - have plans for world domination, and the heroes must band together to defeat them. Playing as some of the most revered Marvel characters, gamers will embark on a dangerous journey across exotic terrain and well-known comic book locations like Atlantis, the Shield Heli-Carrier and the Skrull home world in an attempt to defy the world's most notorious Super Villains. Created by Raven Software, Marvel: Ultimate Alliance lets players control the most powerful Super Hero alliance the world has ever known.

Control characters and compare their abilities and powers. View larger.

Who will eventually win control of Earth View larger.

Who will be on your Marvel dream team View larger.

Over 140 Marvel characters are waiting!
For the first time ever, the world's largest army of Super Heroes is under your control. Truly become your favorite Super Heroes with the fluid Wii controllers. One of the most important implementations on the Wii is the Advanced Gesture-based Combat System which pushes the capabilities of the Wii-mote and Nunchuk controllers. Players can even chain gestures together to create very powerful attack combos. With the Wii-mote, you can swipe upwards for...

Last updated: March 28, 2020 at 16:27 EST. Pricing information is provided by the listed merchants. GoSale.com is not responsible for the accuracy of pricing information, product information or the images provided. Product prices and availability is subject to change. Any price and availability information displayed on amazon.com or other merchants at the time of purchase will apply to the purchase of the product. As always, be sure to visit the merchant's site to review and verify product information, price, and shipping costs. GoSale.com is not responsible for the content and opinions contained in customer submitted reviews.