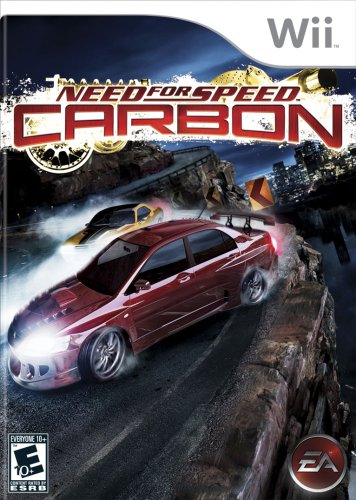 Features:Product Description
In Need for Speed: Carbon, what starts in the city is settled in the canyons. Risk everything in the world's most dangerous and adrenaline-filled form of street racing. As the police turn up the heat, the battle ultimately shifts to Carbon Canyon, where territories and reputations can be lost on every perilous curve. Represent your car class, your crew, and your turf in Need for Speed Carbon, the next revolution in racing games.

Wii takes the cop chases and turf wars to a new level!

Special "Blocker" teammates can cause distractions and take out enemies. View larger.

Will the cops turn up the heat before you can claim all the territories as your own View larger.

What happens in the canyon, stays in the canyon
What starts in the city is settled in the canyons as Need for Speed: Carbon weaves a story line that players won't soon forget in locales that are as detailed as they are deadly. You and your crew must race in an all-out war for the city, risking...

Last updated: June 06, 2020 at 20:45 EST. Pricing information is provided by the listed merchants. GoSale.com is not responsible for the accuracy of pricing information, product information or the images provided. Product prices and availability is subject to change. Any price and availability information displayed on amazon.com or other merchants at the time of purchase will apply to the purchase of the product. As always, be sure to visit the merchant's site to review and verify product information, price, and shipping costs. GoSale.com is not responsible for the content and opinions contained in customer submitted reviews.

Find similar products to the Need for Speed Carbon