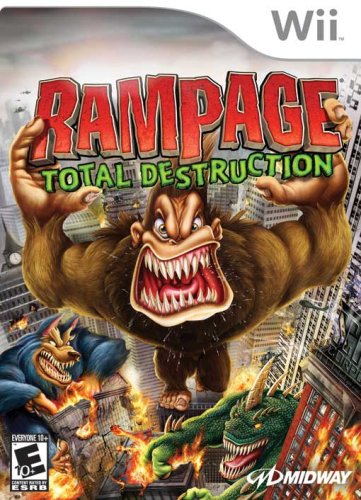 Features:Product Description
Rampage: Total Destruction offers a fresh take on an arcade classic complete with everyone's favorite monsters: George, Lizzie, and Ralph, along with a variety of new monsters to collect and play. Virtually everything in the environment can be damaged, broken, and utterly destroyed with plenty of hilarious results. Aided by power-ups, the Rampage: Total Destruction monsters are capable of acquiring a number of upgrades throughout the course of a single campaign. Players can annihilate cities all over the world in either one or two player mode, in this reinvention of the Midway classic. Hidden power-ups - Collect health, rage, score multipliers, damage multipliers, strength increasers, opponent freeze, speed ups and more

Editorial Review
Built upon the wildly popular Rampage game originally offered on the NES system, the newly released Rampage Total Destruction for the Wii console is sure to please your most destructive appetites.

Game Storyline
In Rampage Total Destruction, you take on the role of mutated giant monsters created by the unscrupulous Scum Labs

The city is helpless against the rampage. Destroy it! View larger.

Hilarious monsters and lots of cities to flatten. View larger.

Challenge your friends to a four-way rampage. View larger. corporation (operating under the guise of a harmless soft drink company). Your goal is to progress through a series of cities around the glove, and in the process, destroy as much of the cities as possible in an effort to locate all the other captive monsters. If that seems like too much to handle, first try the included bonus content that contains the original Rampage, and Rampage World Tour games.

Gameplay
Rampage Total Destruction features four main game modes. The first, is a campaign mode, where one or two players work to progressively take out cities...

Last updated: April 10, 2020 at 12:56 EST. Pricing information is provided by the listed merchants. GoSale.com is not responsible for the accuracy of pricing information, product information or the images provided. Product prices and availability is subject to change. Any price and availability information displayed on amazon.com or other merchants at the time of purchase will apply to the purchase of the product. As always, be sure to visit the merchant's site to review and verify product information, price, and shipping costs. GoSale.com is not responsible for the content and opinions contained in customer submitted reviews.