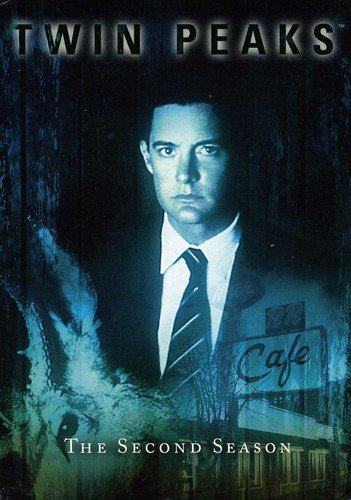 Product Description
Twin Peaks was created by David Lynch and Mark Frost. The show was set in the fictional town of Twin Peaks in northeast Washington state and tells the story of FBI Special Agent Dale Cooper and his investigation of the murder of a popular local teenage sc

Editorial Review
"Don't search for all the answers at once," says a giant appearing to FBI Agent Cooper (Kyle MacLachlan) in a vision. "A path is formed by laying one stone at a time." In Twin Peaks, that's easier said than done. Over the course of two seasons, that path went nowhere and everywhere. "Bureau guidelines, deductive technique, Tibetan method, and luck" don't cut it here. It also takes a little magic, which is what makes David Lynch and Mark Frost's bracingly original serial drama one of TV's ultimate trips, and still the stuff that fever dreams are made of. With the DVD release of season 2, die-hard Peakers can rekindle their obsession with this macabre, maddening, sinister, and surreal series set in the rural Pacific Northwest community whose bucolic surroundings hide "things dark and heinous." (If you're new to Twin Peaks, best to get the lay of the land by watching the brilliant feature-length pilot and the instant-cult-classic first season, which capture Twin at its peak. Neither is widely available on DVD, however.) Three main mysteries drive season 2. First, there's the still (!) unresolved murder of Laura Palmer (Sheryl Lee). Then, there's the question of who shot Cooper in the season 1 cliffhanger. And finally, ultimately: What about Bob With its dream logic, bizarre behavior, and nightmare imagery, much of what transpires goes right by you. Some subplots (Sherilyn Fenn's sexpot Audrey held captive at the bordello, One-Eyed Jacks) are easier to latch on to than others (amnesiac Nadine believes she's an 18-year-old high schooler) And, yes, that's a pre-X-Files David Duchovny as Dennis/Denice, a transsexual DEA agent.

In Twin Peaks' second season, the truth is out there, but we are entering A Few Good Men territory. When Laura's killer is at last revealed in episode 16, no doubt many will not be able to handle the truth. The teases, red herrings, and out-and-out gonzo looniness will try the patience of viewers with a more conventional bent. But, as Cooper observes at one point, "All in all, [it's] a very interesting experience," with enough doppelgangers, allusions, pop-culture references, and in-jokes to keep bloggers buzzing. If, for example, you get any...

Set Price Alert
Set Price Alert
Read Reviews
Searching Stores
Found at 0 Stores
Last updated: January 27, 2020 at 07:53 EST. Pricing information is provided by the listed merchants. GoSale.com is not responsible for the accuracy of pricing information, product information or the images provided. Product prices and availability is subject to change. Any price and availability information displayed on amazon.com or other merchants at the time of purchase will apply to the purchase of the product. As always, be sure to visit the merchant's site to review and verify product information, price, and shipping costs. GoSale.com is not responsible for the content and opinions contained in customer submitted reviews.

Find similar products to the Twin Peaks - The Second Season