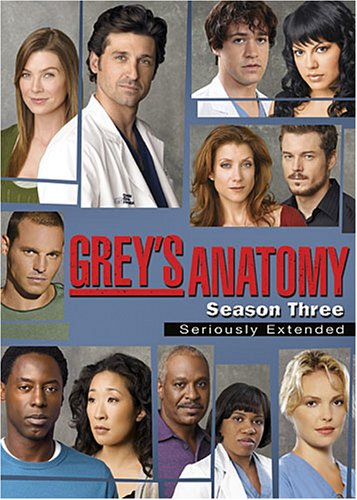 Editorial Review
In the third season of Grey's Anatomy, one medical intern will get married to a superior while another is left standing at the altar. Two interns will lose their parents. And one main character will try to commit suicide--or not fight very hard to save her own life. There will be multiple hook-ups, infidelity, and trust issues. In between the soap opera-style drama that attracts millions of viewers each week, interns Meredith Grey (Ellen Pompeo), Cristina Yang (Sandra Oh), Izzie Stevens (Katherine Heigl), Alex Karev (Justin Chambers), and George O'Malley (T.R. Knight) will also perform some medical miracles. At the end of season 2, Izzie was distraught over the death of her fiancé, Denny. Now she finds that her very rich boyfriend has left her millions of dollars. Instead of putting the money into the bank and allowing it to accrue interest until she decides what she wants to do with it--as sensible Dr. Miranda Bailey (Chandra Wilson) suggests--Izzie mopes around the house in an irritating stupor. Actually, irritating is an apt description for several of the main characters. It takes a leap of faith to believe that sexy, spectacular, and rich orthopedic surgeon Callie Torres (Sara Ramirez) would be even vaguely interested in wishy-washy George. Previously, he'd convinced himself that he was in love with Meredith. Now he's pining for his other roommate, Izzie, even though he's already got Callie. And rather than welcoming her into their fold, Izzie and Meredith (and to a lesser extent Cristina) give Callie the mean-girls treatment. They may have rebuffed him at one point, but they don't want Callie to have him, either. There is something very needy about this group of interns who have no one to turn to but each other when a crisis occurs.

Viewers get some insight into "dark and twisty" Meredith's upbringing, as she spends more time with her cold and demanding mother, who is suffering from Alzheimer's, and her milquetoast father, who didn't fight very hard to have contact with her as a child after her mom kicked him out of their house. It's no wonder Meredith ended up emotionally damaged and unwilling to completely open up to Derek Shepherd (Patrick Dempsey) ... a.k.a. McDreamy. Though the show's title implies that Meredith is the most important character, it's not true. The ensemble cast, which also includes James Pickens Jr. as Dr. Richard Webber (who had a long and complicated affair with Meredith's mother) and Kate Walsh as Derek's...
[+] Read More

Last updated: July 11, 2020 at 02:56 EST. Pricing information is provided by the listed merchants. GoSale.com is not responsible for the accuracy of pricing information, product information or the images provided. Product prices and availability is subject to change. Any price and availability information displayed on amazon.com or other merchants at the time of purchase will apply to the purchase of the product. As always, be sure to visit the merchant's site to review and verify product information, price, and shipping costs. GoSale.com is not responsible for the content and opinions contained in customer submitted reviews.