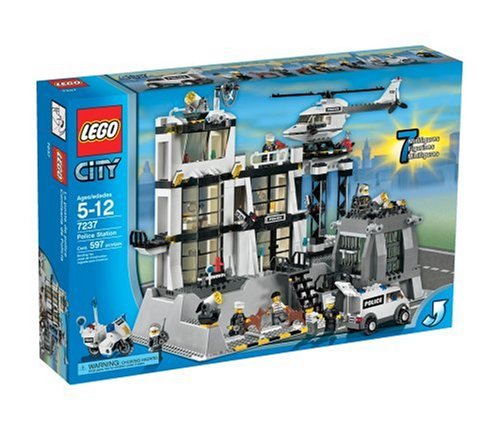 Features:Product Description
Get ready for action at the Police Station! The police station is the place to go for LEGO City adventure! The brave officers are ready to fight crime with their police helicopter, van, and cycle. Launch the copter from the heliport, then bring the crook back to jail. Monitor the city from the control room and send out the police at the first sign of trouble! Move the heliport platform so the helicopter can take off and land. Features police helicopter, van & cycle. Includes 5 officers, 2 robbers & 2 police dogs.

Award-Winning Fun
Having won numerous accolades, including the National Parenting Center's Seal of Approval and the "Greatest Products of 2005" award from iParenting Media, this toy lives up to the quality and reputation of Lego. With 597 Lego pieces, this set teaches kids creative building skills while they have fun. The durable plastic Lego brick stands up to a lifetime of play. Step-by-step diagrams are included, which detail the model construction.

Included figures are five officers, two robbers, and two police dogs. View larger.City of Possibilities
But what's a city without any people! Along with the police station, this set comes with miniature figures, including five officers, two robbers, and two police dogs. When the officers get called to duty, a helicopter, van, and motorcycle are included to get them quickly to the scene of the crime. The scenarios are virtually endless. The station itself features a control tower to monitor outside activity, a jail to keep the crooks, and a heliport for easy helicopter take-offs and landings. Recommended for kids ages 5 to 12 years old.

About LEGO
The world-famous building block set encourages a unique type of play that is fun, creative, engaging, and challenging. Taking its name...

Last updated: March 08, 2021 at 02:07 EST. Pricing information is provided by the listed merchants. GoSale.com is not responsible for the accuracy of pricing information, product information or the images provided. Product prices and availability is subject to change. Any price and availability information displayed on merchants at the time of purchase will apply to the purchase of the product. As always, be sure to visit the merchant's site to review and verify product information, price, and shipping costs. GoSale.com is not responsible for the content and opinions contained in customer submitted reviews.