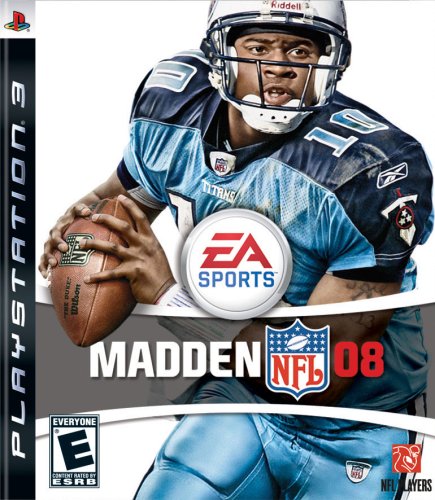 Features:Product Description
Why just watch NFL football on TV when you can take an active role in the game with Madden NFL 08 by Electronic Arts. Madden NFL 08 lets you control the running game like never before. With your Playstation 3, NFL football becomes an interactive sport. You're no longer a mere spectator. You're in it to win it! Step up as the lead blocker to create a hole, then take control of the tailback and smash through, overpower, or slash away from would-be tacklers as you fight for every yard. Innovative rushing controls give you a game-breaking ground attack featuring all-new jukes, cutbacks, and the distinct running styles of your favorite backs. Between the tackles or in the open field, run to daylight with Madden NFL 08. Scout collegiate prospects with the all-new NFL Draft Scouting System Watch players impact their teams with the new Franchise Player Roles feature Use actual plays from your favorite team's defensive playbook to shut down the running game, pressure the quarterback, or force key turnovers

Last updated: January 15, 2021 at 10:24 EST. Pricing information is provided by the listed merchants. GoSale.com is not responsible for the accuracy of pricing information, product information or the images provided. Product prices and availability is subject to change. Any price and availability information displayed on ebay.com or other merchants at the time of purchase will apply to the purchase of the product. As always, be sure to visit the merchant's site to review and verify product information, price, and shipping costs. GoSale.com is not responsible for the content and opinions contained in customer submitted reviews.