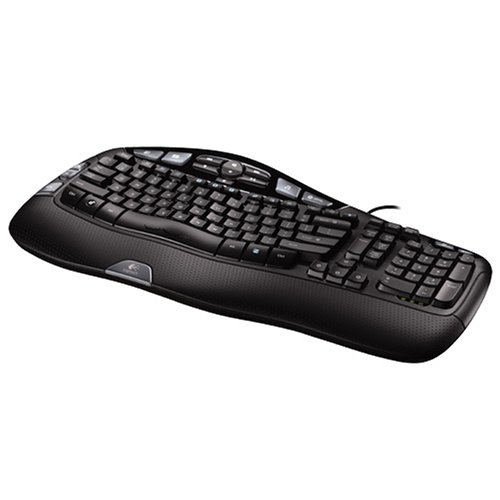 Product Description
Catch the wave with the Logitech Wave Keyboard 920-000325 - the exciting new shape of comfort. It's created for hands just like yours, with contoured, uniform-size keys that cradle your fingers naturally while the curved keyboard promotes a more ergonomically correct hand position.One-touch controls give you direct access to many of the new features in Windows Vista, including Flip 3D, Zoom, Photo Gallery, and Gadgets. Programmable F-keys add instant access to favorite applications, games, folders, and Web pages. A cushioned palm rest encourages a relaxed position for typing.

Editorial Review
Logitech is touting an advancement in comfort and usability design with its ergonomic, cross-platform Wave keyboard. There might be some marketing hyperbole to this claim, but after a week of typing with the Wave, I'm not sure that I could live without it.

Like other ergonomic keyboards, the Wave includes an elevated palm rest, though not as extreme as the platforms of old. It's also covered in a lightly padded vinyl upholstery that feels soft yet firm under the wrist, as well as a Goldilocks amount of tackiness (i.e., not too slippery, not sticky, just right). The keys are also positioned in a gentle U-shaped arc that nearly escapes the eye, but is apparent once you set your wrists down and start typing.

Contoured, wave-shaped key design conforms naturally to your fingers.But the biggest design innovation that the Wave introduces comes from its name--the keys undulate across the board in a wave-shaped contour that mimics the changing lengths in your own digits. The keys are at their highest on the outside at the A and Enter keys (which, if you're a touch typist, is where your little fingers are positioned), and the keys trough to their lowest point at D and K (where the longer middle finger resides) before rising slightly at the G and H keys. The keys have a maximum distance variation of 4mm, and the spacebar mimics the wave contour of the keyboard design.

As someone who writes for a living, my computer keyboard is one of the most important tools I have and one that I'm connected to for hours every day. I've gone through many models over the years to get just the right one, and I currently use the Matias Tactile Pro on my Mac as it provides some of the best keystroke feedback I've found (which is the polar opposite to the frustratingly squishy keyboards that came with my HP and Apple PCs).

While the rolling contour of the keyboard layout...
[+] Read More

Last updated: August 04, 2020 at 09:56 EST. Pricing information is provided by the listed merchants. GoSale.com is not responsible for the accuracy of pricing information, product information or the images provided. Product prices and availability is subject to change. Any price and availability information displayed on amazon.com or other merchants at the time of purchase will apply to the purchase of the product. As always, be sure to visit the merchant's site to review and verify product information, price, and shipping costs. GoSale.com is not responsible for the content and opinions contained in customer submitted reviews.