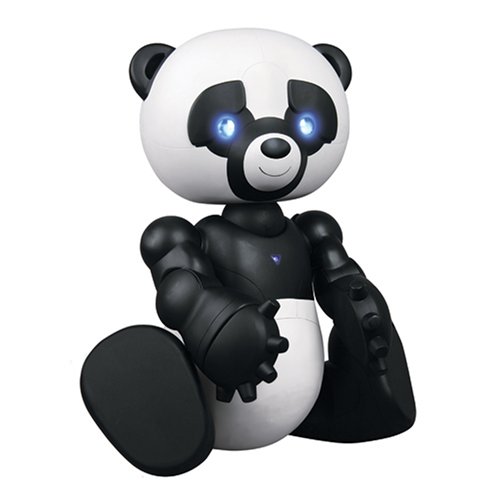 Features:Product Description
This adorable robotic panda is a fun-loving friend who likes to tell stories, play games and sing songs. Robopanda's engaging personality and bright animated eyes will immediately endear him to children of all ages. There's no need for a remote control -- you can interact with Robopanda directly through his integrated audio and touch sensors. Using capacitive touch sensor technology, he knows when he is being patted, touched, or stroked and responds accordingly; his audio sensor allows him to hear sounds for game play and other interactions.

At the touch of a switch, you can set him into one of three play modes: in Training Mode he will teach you how to play with him; in Friend Mode he will engage you in conversation and amuse you with jokes; in Menu Mode, you can use his sensors to navigate through his menus, review and select from among his many stories, interactive games and songs. When Robopanda tells stories, he invites you to make decisions that will determine the outcome of the story.

Equipped with an internal dual-axis accelerometer and tilt sensors, Robopanda knows when you pick him up or carry him somewhere, and he's going to let you know how he feels about it! And, he can even switch from sitting to crawling position, crawl on all fours and switch back to sitting again. Program him to perform a sequence of actions by simply moving his limbs around. Robopanda comes with an adorable plush panda accessory (who Robopanda will recognize and interact with when he's close by) and 2 cartridges containing interactive content. Requires 4 "AA" and 6 "C" batteries, not included. Measures 19"H.


The Robopanda can crawl on all fours, give hugs, and more. Engage your child's imagination with the Robopanda, a playful, talkative, interactive robotic panda friend. With his engaging personality and bright animated eyes, the Robopanda loves to share stories and jokes, play games, sing songs, and chat with children of all ages. The fun-filled robotic bear can even crawl on all fours, return to a sitting position, and give hugs, making him far more versatile than a traditional teddy bear (and much easier to maintain than a dog). Designed to work without a remote control, the Robopanda is controlled directly by touch and sound, with eight touch sensors and a stereo sonic sensor located throughout his body. Touch his head and he'll respond with a nod. Pick him up and he'll giggle...

Last updated: September 26, 2020 at 08:45 EST. Pricing information is provided by the listed merchants. GoSale.com is not responsible for the accuracy of pricing information, product information or the images provided. Product prices and availability is subject to change. Any price and availability information displayed on amazon.com or other merchants at the time of purchase will apply to the purchase of the product. As always, be sure to visit the merchant's site to review and verify product information, price, and shipping costs. GoSale.com is not responsible for the content and opinions contained in customer submitted reviews.