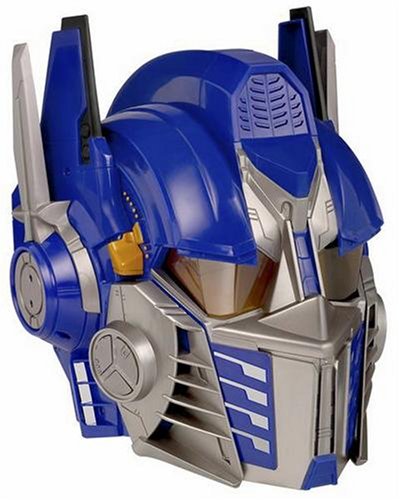 Features:Editorial Review
.caption { font-family: Verdana, Helvetica neue, Arial, serif; font-size: 10px; font-weight: bold; font-style: italic; } ul.indent { list-style: inside disc; text-indent: -15px; } With the Hasbro Transformers Optimus Prime Voice Changer Helmet, your child can become the mighty commander of the Autobots and defend the Earth against the Decepticons. Equipped with this movie-authentic helmet, kids don't just look like Optimus Prime, but also miraculously alter their voices to sound like him. Recommended for ages 5 and up, this helmet is truly the ultimate headgear for any Optimus Prime fan.

This incredibly detailed voice changer helmet is constructed of durable plastic. View larger. View Side.
Authentic Design
The Optimus Prime Voice Changer Helmet is incredibly detailed, resembling Optimus Prime right down to the grooves on his forehead plate. Constructed from durable plastic and finished in vivid colors, this helmet is virtually indistinguishable from the Optimus Prime in the movie. If your child isn't using it as a toy, you could easily put it out as a display piece. The helmet also features easy-to-adjust straps, which fit the helmet comfortably over your child's head.

Transform Your Voice
This helmet uses an incredible voice modulator system to transform your young hero's voice and make it sound just like Optimus Prime's. It doesn't matter whether you're a little kid or a full-grown adult -- when you speak through the microphone, your voice will instantly be changed into the rich baritone of the Autobots commander. In addition to changing its wearer's voice, the helmet also features sound effects and has five different voice clips from the movie. Unforgettable lines such as "I am Optimus Prime" can be played at the touch of a button, making this the ideal role-playing toy.

About Transformers
The Transformers began as a Hasbro toy line back in 1983, featuring toy vehicles that could transform into robots. The toys soon inspired an entire universe of fictional story lines, pitting the two factions of Transformers -- the heroic Autobots and the evil Decepticons -- against one another. A live-action movie based on the Transformers was released...

Last updated: September 26, 2020 at 10:20 EST. Pricing information is provided by the listed merchants. GoSale.com is not responsible for the accuracy of pricing information, product information or the images provided. Product prices and availability is subject to change. Any price and availability information displayed on amazon.com or other merchants at the time of purchase will apply to the purchase of the product. As always, be sure to visit the merchant's site to review and verify product information, price, and shipping costs. GoSale.com is not responsible for the content and opinions contained in customer submitted reviews.