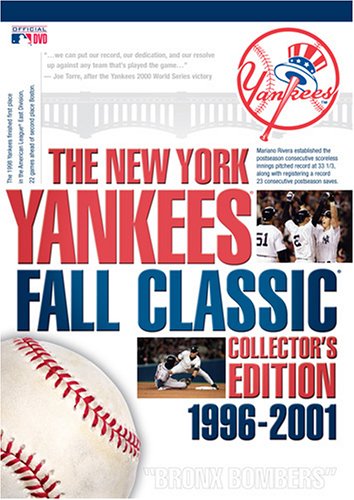 Editorial Review
The New York Yankees Fall Classic Collector's Edition 1996-2001 is the perfect counterargument for Yankees fans who've gotten tired of cocky Red Sox fans bragging about their comprehensive 2004 World Series DVD set. Sure, Boston finally broke its curse and in the process branded the Bronx Bombers as the greatest chokers in sports history. But let's not forget that it was the Yankees who won four of the last five World Series of the 20th century--1996, 1998, 1999, and 2000--and if this seven-disc set...
[+] Read More

Last updated: August 08, 2020 at 09:49 EST. Pricing information is provided by the listed merchants. GoSale.com is not responsible for the accuracy of pricing information, product information or the images provided. Product prices and availability is subject to change. Any price and availability information displayed on amazon.com or other merchants at the time of purchase will apply to the purchase of the product. As always, be sure to visit the merchant's site to review and verify product information, price, and shipping costs. GoSale.com is not responsible for the content and opinions contained in customer submitted reviews.