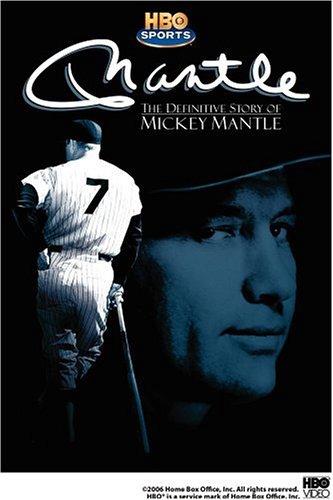 Editorial Review
"Babe Ruth did it on hot dogs and beer," read a sign in the bleachers taunting Barry Bonds as he renewed his allegedly tainted pursuit of the Babe's (and then Henry Aaron's) home run record in 2006. And the Mick Well, as detailed in Mantle - The Definitive Story of Mickey Mantle, this New York Yankee immortal's rise to fame and glory was fueled by sheer talent; the drinking and carousing that were part of the package could hardly be called "performance enhancing." Indeed, as great as Mantle was--and at his peak in the 1950s and early '60s, only Willie Mays could rival him--he spent his retirement years haunted by the notion that he could have been better. That would have been something, considering that Mantle, the handsome, charming Oklahoma hayseed who was not yet 20 when he joined the Yankees in 1951, played on 12 World Series teams (seven of them winners), made the All-Star team 16 times, won three MVP trophies and one Triple Crown, hit over 500 homers, and made the Hall of Fame in his first year of eligibility. Still, he was plagued by serious injuries, not to mention a variety of self-inflicted problems, principally alcoholism; he was also a poor father to his four sons, who were raised mainly by their mother and came to love the bottle as much as their dad did. Retirement (in 1969) only made things worse, as his alcoholism eventually led to the need for a controversial liver transplant (some claimed that his celebrity status pushed Mantle higher up the organ recipient list than he deserved to be) and, finally, the cancer that killed him in 1995. But as this hour-long HBO documentary (narrated by Liev Schreiber and featuring interviews with Bob Costas, Billy Crystal, former teammates, and many others) tells it, Mantle's finest hours came near the end, when he admitted that he'd been a terrible role model who "was given so much… (but) I blew it." Somewhat sentimental but not mawkish, Mantle will transport you back to a simpler, more innocent time. And in an era when so many sports heroes are merely super-rich, arrogant criminals, that can't be bad. --Sam Graham

Description
The almost mythic career of Yankee slugger Mickey Mantle is the subject of this acclaimed HBO Sports documentary special. Over 18 seasons with the Bronx Bombers, despite constant nagging injuries, Mantle managed to hit 536 home runs, twice hitting more than 50 in a season. He finished ten seasons with a batting average of .300 or more and suited up for seven World...
[+] Read More

Last updated: September 24, 2020 at 21:29 EST. Pricing information is provided by the listed merchants. GoSale.com is not responsible for the accuracy of pricing information, product information or the images provided. Product prices and availability is subject to change. Any price and availability information displayed on amazon.com or other merchants at the time of purchase will apply to the purchase of the product. As always, be sure to visit the merchant's site to review and verify product information, price, and shipping costs. GoSale.com is not responsible for the content and opinions contained in customer submitted reviews.