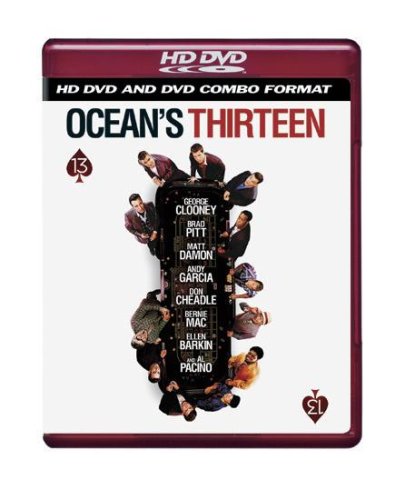 Combo HD DVD and Standard DVD [HD DVD]
Editorial Review
George Clooney is one, Brad Pitt is two, Matt Damon three... well, let's just assume there are 13 collaborators in this installment of Steven Soderbergh's profitable caper franchise. We're back in Las Vegas for Ocean's Thirteen, where the boys plot to shut down the brand-new venture of a backstabbing hotelier (Al Pacino) because the guy double-crossed the now-ailing Reuben (Elliott Gould). If you look at the plot too closely, the entire edifice collapses (hey, how about those Chunnel-digging giant drills), but Soderbergh conjures up a visual style that swings like Bobby Darin at the Copa. Other than the movie-star dazzle, the main reason to see the film is Soderbergh's uncanny feel for how the widescreen frame can float through the neon spaces of Vegas or sort through groups of characters sitting in hotel rooms talking (he shot the film himself, under his pseudonym Peter Andrews).

The film doesn't give enough time to goofballs Casey Affleck and Scott Caan (whose riffs made Ocean's Twelve worth seeing), although it provides comic stuff for a fun roster of actors, including Eddie Izzard, David Paymer, and Bob ("Super Dave") Einstein. Meanwhile, Ellen Barkin makes a fetching assistant for Pacino, and Pacino himself, his hair dyed Trumpian orange, is content to gnaw on some ham for the duration. Biggest puzzle about the two sequels is why George Clooney seems content to retreat from centerstage. Still, his Hemingwayesque conversations with Pitt are an amusing form of male shorthand, and even as the movie overstays its welcome during a long finale, Clooney's easy sense of cool makes it all seem acceptable. --Robert Horton

Description
It's bolder. Riskier. The most dazzling heist yet. George Clooney, Brad Pitt, Matt Damon and more reteam with director Steven Soderbergh for a split-second caper that stacks the deck with wit, style and cool. Danny Ocean again runs the game, so no rough stuff. No one gets hurt. Except for double-crossing Vegas kingpin Willy Bank (Al Pacino). Ocean's crew will hit him where it hurts: in his wallet. On opening night of Bank's posh new casino tower The Bank, every turn of a card and roll of the dice will come up a winner for bettors. And they'll hit him in his pride, making sure the tower doesn't receive a coveted Five Diamond Award. That's just the start of the flimflams. The boys are out to break The Bank. Place your bets!

Last updated: February 23, 2020 at 09:39 EST. Pricing information is provided by the listed merchants. GoSale.com is not responsible for the accuracy of pricing information, product information or the images provided. Product prices and availability is subject to change. Any price and availability information displayed on amazon.com or other merchants at the time of purchase will apply to the purchase of the product. As always, be sure to visit the merchant's site to review and verify product information, price, and shipping costs. GoSale.com is not responsible for the content and opinions contained in customer submitted reviews.