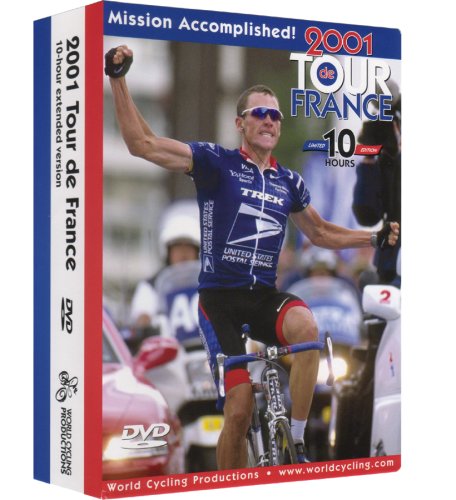 Product Description
This is the most comprehensive coverage of the Tour de France available in the world. This five-cassette boxed set includes all the original 3-hour footage, plus 7 additional hours of action--mountains, time trails, interviews, and profiles. Experience the Tour as never before with this unique Limited Collector's Edition!
With his third victory in the 2001 Tour de France, the courageous cowboy Lance Armstrong became the first American ever to win three consecutive tours and the fifth cyclist ever to accomplish three consecutive Tour wins. Any lingering doubts about Armstrong's form were brushed aside on L'Alpe d'Huez, Stage 10, when the Texan soared up cycling's most hallowed mountain to take the 8th Tour stage win of his career. Armstrong pulled off a masterly bluff as he faked fatigue on the two earlier climbs of the day and lured Jan Ullrich and others into a false sense of security before finishing the stage two minutes ahead of his most dangerous rival.

Other great moments of the 2001 Tour include: Armstrong's win in the Pyrénées for former teammate Fabio Casartelli; the epic battle for the green jersey between 5-time winner Eric Zabel and Credit Agricole's Stuart O'Grady; the emotional return to form by Frenchman Laurent (JaJa) Jalabert as he takes the coveted King of the Mountain jersey; and the ride of Roberto Laiseka, egged on by thousands of wild Basque fans, as he claims an emotional victory at Luz-Ardiden. With 217 km breakaways, unforgettable sprint finishes, and thrilling ascents by the best cyclists in the world, the 2001 Tour is a World Cycling Productions classic!

WCP has been producing classic coverage of the Tour de France since 1986. Once again, Phil Liggett and Paul Sherwen offer world-class analysis and commentary. No one brings you deeper into the drama, the tension, and the tactics of the tour than Liggett and Sherwen. Includes stage-by-stage coverage from start to finish, plus behind-the-scenes interviews.

Last updated: January 15, 2021 at 09:39 EST. Pricing information is provided by the listed merchants. GoSale.com is not responsible for the accuracy of pricing information, product information or the images provided. Product prices and availability is subject to change. Any price and availability information displayed on ebay.com or other merchants at the time of purchase will apply to the purchase of the product. As always, be sure to visit the merchant's site to review and verify product information, price, and shipping costs. GoSale.com is not responsible for the content and opinions contained in customer submitted reviews.