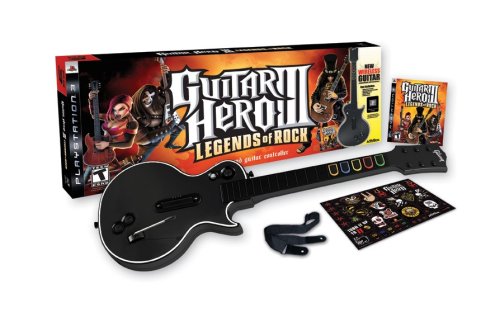 Features:Product Description
The third game from the Guitar Hero series is here, and ready to rock your face off. Channel your inner guitar god as you thrash your way through all sorts of venues, In addition to standard Guitar Hero features you know and adore, this game features all kinds of killer new options, such as the new multiplayer action-inspired battle mode, grueling boss battles, a bevy of exclusive unlockable content and authentic rock venues. The expanded online multiplayer game modes will also allow axe-shredders worldwide to compete head-to-head for true legendary rock status. Best of all, check out the new songs! Fresh downloadable content will be offered on multiple platforms, and players can now shred to a set list from many of the greatest rock songs ever recorded. Featured hits include: Rock And Roll All Nite (as made famous by Kiss) School's Out (as made famous by Alice Cooper) Cult of Personality (by Living Colour) Barracuda (as made famous by Heart)
This game comes bundled with the all-new wireless Gibson Les Paul guitar controller, available for each platform for the very first time. The exclusive Gibson guitars will include innovative features such as removable faceplates that will allow fans to later personalize their guitars and make it their own, and a new button color design that will be integrated for an even greater authentic feel and rock experience. With Guitar Hero 3, you've got more than a game - it's a one-of-a-kind hard rock experience. New Les Paul customizable wireless guitar controller Thrash and burn through new venues and varying levels of difficulty New playlist with awesome new songs and unlockable content Multiplayer action mode Grueling boss battles Online multiplayer mode lets you battle other rockers worldwide For use on the Sony Playstation 3 Game System

Editorial Review
Product Description
The third game from the Guitar Hero series is going to rock your face off. You will channel your inner guitar god as you thrash your way through all sorts of venues. In addition to standard Guitar Hero features you know and adore, this game has all kinds of killer new options such as the new multiplayer action-inspired battle mode,...
[+] Read More

Last updated: January 17, 2021 at 16:53 EST. Pricing information is provided by the listed merchants. GoSale.com is not responsible for the accuracy of pricing information, product information or the images provided. Product prices and availability is subject to change. Any price and availability information displayed on ebay.com or other merchants at the time of purchase will apply to the purchase of the product. As always, be sure to visit the merchant's site to review and verify product information, price, and shipping costs. GoSale.com is not responsible for the content and opinions contained in customer submitted reviews.