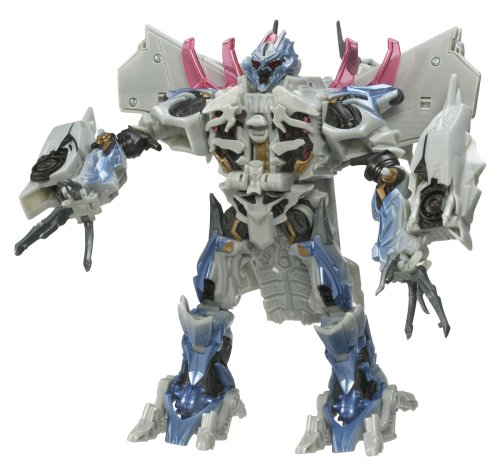 Features:Product Description
Megatron is a towering, bulky, dinosaur-footed monstrosity with a varied color scheme noticeably different than that of the movie version. Megatronâs jet mode looks a little bit like one of Leonardo da Vinciâs flying machines. His robot mode, bearing a slightly simplified version of the movie Megatronâs intricate armor plating, is reasonably well articulated. Among Megatronâs arsenal of gimmick features are electronic sounds and lights, a launching claw that becomes a chain whip, and arms that combine to form a fusion cannon. Initially Megatron was Cybertronâs designated Lord High Protector, although eventually he succumbed to his consuming lust for the Allspark. Megatronâs agenda placed him in opposition of Optimus Prime---forcing the latter to rally a militia against Megatronâs Decepticons. Megatron was single-minded and monstrously powerful; the Decepticons gained ground against their adversaries, and as a desperate contingency the Allspark was jettisoned into space. Megatronâs attempt to find the Allspark ultimately divided him from his forces and led him into frozen stasis.

Last updated: August 03, 2020 at 15:37 EST. Pricing information is provided by the listed merchants. GoSale.com is not responsible for the accuracy of pricing information, product information or the images provided. Product prices and availability is subject to change. Any price and availability information displayed on amazon.com or other merchants at the time of purchase will apply to the purchase of the product. As always, be sure to visit the merchant's site to review and verify product information, price, and shipping costs. GoSale.com is not responsible for the content and opinions contained in customer submitted reviews.