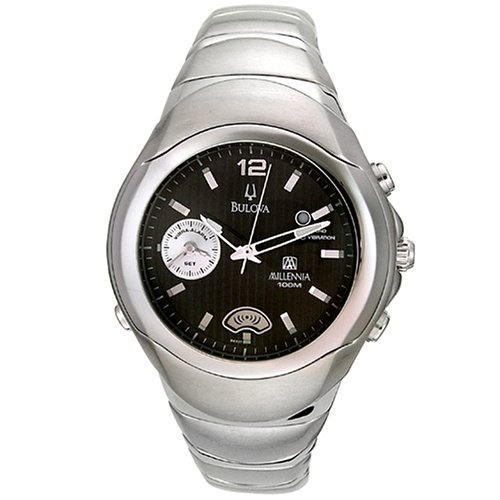 Editorial Review
Sleek lines and aerodynamic styling give this watch a distinctly modern appeal, and the features are just as state-of-the-art. A contoured brushed steel case blends seamlessly into a brushed and polished steel link bracelet. The fully integrated bezel houses a sleek black dial with an Arabic numeral 12, luminous hands and bar markers, an alarm subdial, and an alarm signal indicator. The dual alarm mode allows you to choose between the 15-second sound alarm and the more discreet 20-second vibrating alarm. This watch features precise quartz movement and a scratch-resistant domed crystal; it fastens securely with a foldover clasp and safety bar. Water-resistant to 100 meters, it is suitable for swimming and poolside diving.

About Bulova
In 1875, a young Czech immigrant named Joseph Bulova set up shop in New York City, and a legendary American watch brand was born. Bulova was trained as a jeweler, and his expertise carried over into his watchmaking career, which began around 1911 with boudoir clocks and pocket watches, and soon evolved to include what was then one of the latest and most fashionable technological innovations: the wristwatch. Bulova introduced its first line of wristwatches in 1919. The company grew and prospered, and soon early radio and television ads were declaring, "America runs on Bulova time." In the 1950s, continuing its legacy of innovation, Bulova introduced Accutron, the first electronic watch, and the first breakthrough in timekeeping technology in over 300 years. The Accutron timing mechanism was later adapted for use by NASA computers and a Bulova timer was even placed on the moon to control transmissions of data. Bulova timepieces have kept official time aboard Air Force One and have also served as official timepieces for U.S. Olympic teams. Today, Bulova maintains its tradition of excellence in technology and design, offering a diverse collection of beautiful precision timepieces for every occasion.

Last updated: June 03, 2020 at 03:36 EST. Pricing information is provided by the listed merchants. GoSale.com is not responsible for the accuracy of pricing information, product information or the images provided. Product prices and availability is subject to change. Any price and availability information displayed on amazon.com or other merchants at the time of purchase will apply to the purchase of the product. As always, be sure to visit the merchant's site to review and verify product information, price, and shipping costs. GoSale.com is not responsible for the content and opinions contained in customer submitted reviews.

Find similar products to the Bulova Men's Millennia Watch #96A17