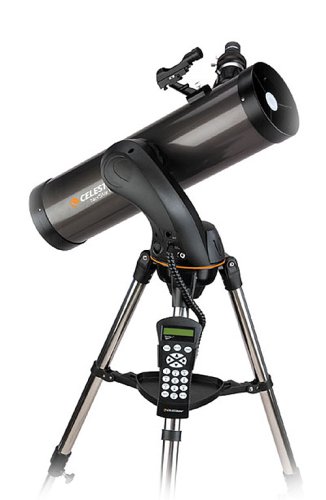 Features:Product Description
The popularity of Celestron's NexStar 114 models inspired us to go bigger! Celestron is proud to introduce NexStar 130 SLT. The NexStar 130 SLT has 30% more light-gathering power than our 114mm telescope. And the 114 SLT, like the other models in the SLT Series, comes with a fully computerized hand control. The computerized hand control gives you the ability to automatically slew to any of its 4,000+ objects, including over 600 galaxies, 300 clusters and dozens of beautiful binary stars. With its pre-assembled, adjustable steel tripod, the NexStar 114 SLT can be up and ready to use in a matter of minutes. The SkyAlign alignment technology and the included StarPointer Finderscope with a red LED makes aligning a breeze.View the details of the lunar surface, the rings of Saturn, the polar ice caps on Mars, the cloud belts on Jupiter or a number of the Messier objects such as the globular cluster in Hercules (M13), or the Great Nebula in Orion (M42). Begin to explore some of the fainter Messier objects using the additional light-gathering capabilities of the 130 SLT's 5" primary mirror. Because of the Newtonian design, the mirror gives fully color-corrected views that are best suited for astronomical use. SkyAlign With Celestron's revolutionary new alignment technology, setting up and using a computerized telescope is faster and easier than ever before! Point the telescope at three bright objects in the sky and the telescope tells YOU what

Last updated: September 28, 2020 at 14:33 EST. Pricing information is provided by the listed merchants. GoSale.com is not responsible for the accuracy of pricing information, product information or the images provided. Product prices and availability is subject to change. Any price and availability information displayed on amazon.com or other merchants at the time of purchase will apply to the purchase of the product. As always, be sure to visit the merchant's site to review and verify product information, price, and shipping costs. GoSale.com is not responsible for the content and opinions contained in customer submitted reviews.