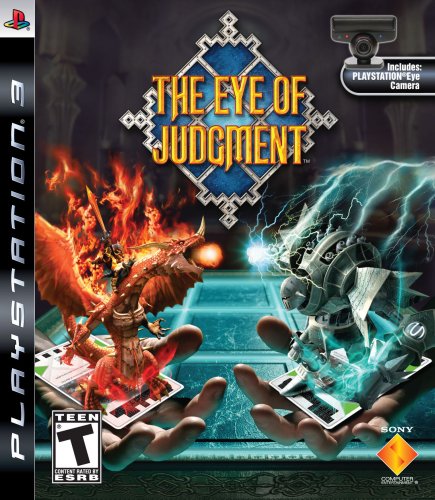 Features:Product Description
Developed by Sony Computer Entertainment Worldwide Studios, JAPAN Studio, The Eye of Judgment presents a new style of gameplay where collectable trading cards, embedded with a CyberCode, are brought to life in the 3D game through use of an innovative "9 Fields" battle mat and Playstation Eye. Players compete by selecting a card and placing the coded card in front of the Playstation Eye for their respective creatures to come to life and battle on screen. Players take turns placing cards as they jostle for control; the winner is the first player to conquer five of the nine squares of the "9 Field. Players have four ways to play The Eye of Judgment: single player against their PS3, against an opponent in two-player mode, against an opponent online, or letting the PS3 play out a round with the cards the player owns. The Eye of Judgment comes with a starter deck of 30 character and spell cards manufactured by Hasbro. Pre-constructed decks and booster packs, sold separately in stores, can be purchased to strategically build the perfect deck using the 110 cards unique cards available. The Eye of Judgment is a socially engaging title that will appeal to gamers of all ages and abilities More than 100 different characters and spells will be offered via additional booster packs and pre-constructed decks, available at major retail chains. ESRB Rated T for Teen

Last updated: August 07, 2020 at 21:54 EST. Pricing information is provided by the listed merchants. GoSale.com is not responsible for the accuracy of pricing information, product information or the images provided. Product prices and availability is subject to change. Any price and availability information displayed on amazon.com or other merchants at the time of purchase will apply to the purchase of the product. As always, be sure to visit the merchant's site to review and verify product information, price, and shipping costs. GoSale.com is not responsible for the content and opinions contained in customer submitted reviews.

Find similar products to the Eye of Judgment