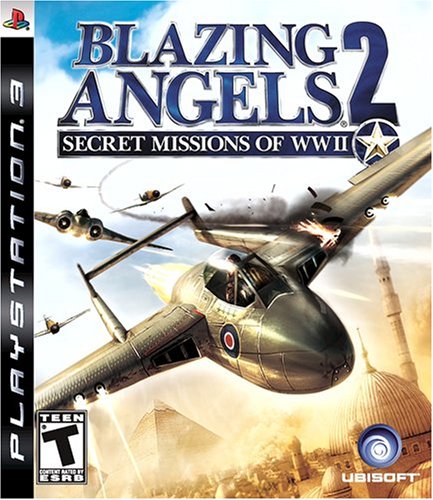 Features:Product Description
In this game, you are the leader of Operation Wildcard, an undercover and elite squad of pilots secretly created by the American government. Your mission is to sabotage and destroy the Third Reich's evil plans to create a weapon of mass destruction. During this mission you and your team discover that the bad guys also have an elite team of their own. In an attempt to disarm the enemy, you engage in dramatic and movie-like spy missions in some of the world's most exotic locations using experimental weapons and flying never-before-seen prototype aircraft. Challenge up to 16 players in free-for-all, co-op and squad-based missions, including the all new Epic Battle and Capture the Flag modes. Epic boss battles Experience a new sensation of flight. With four alternative control configurations, Blazing Angels will take full advantage of the motion sensor/tilt feature. Players can easily maneuver the plane just by moving the SIXAXIS controller. Arcade and simulator modes are included, for both classic control and motion-sensitive control. All New Multiplayer Racing Mode (PS3 exclusive) - Fly in a racing circuit while trying to avoid the ground, natural map terrain, urban obstacles, and other landmarks in pursuit to be the first to cross the finish line. ESRB Rated T for Teen

Last updated: June 04, 2020 at 16:17 EST. Pricing information is provided by the listed merchants. GoSale.com is not responsible for the accuracy of pricing information, product information or the images provided. Product prices and availability is subject to change. Any price and availability information displayed on amazon.com or other merchants at the time of purchase will apply to the purchase of the product. As always, be sure to visit the merchant's site to review and verify product information, price, and shipping costs. GoSale.com is not responsible for the content and opinions contained in customer submitted reviews.