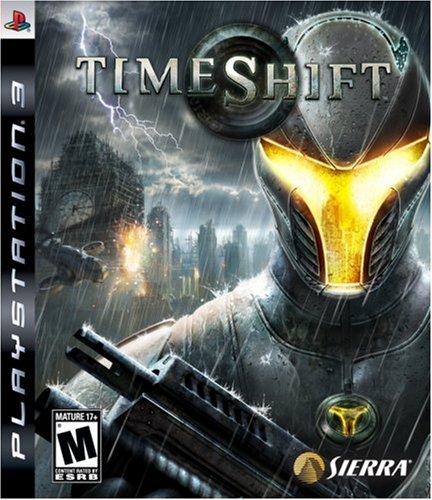 Features:Product Description
Timeshift takes the first-person shooter to an entirely different dimension marked by erratic time and unrelenting action, a place where you can use time as a weapon and slow, stop, and reverse the flow of time to destroy your enemies and their surroundings. It all begins with you and your colleagues Krone and Lin, members of a secret government agency that is developing a time travel technology. However, Krone betrays you and steals the experimental time suit to jump into an alternate timestream, killing Lin in the process. You put on a second time suit that is more advanced, but also more experimental and risky, jump into the alternate time-stream and head after Krone. You suddenly emerge in the midst of a violent conflict in a city where Krone is supreme dictator, and the rebelling insurgents are on the verge of destruction. Ally yourself with the rebels and fight alongside them through this unfamiliar world on your mission to find Krone, and ultimately return home. 16 person multiplayer features 14 maps to create time stopping chaos and massive destruction to an already devastated world. Multiplayer includes 6 unique heart stopping, time crunching modes.Unleash an arsenal of 9 powerful. multifunction weapons. ESRB Rated M for Mature

Last updated: February 28, 2021 at 13:44 EST. Pricing information is provided by the listed merchants. GoSale.com is not responsible for the accuracy of pricing information, product information or the images provided. Product prices and availability is subject to change. Any price and availability information displayed on merchants at the time of purchase will apply to the purchase of the product. As always, be sure to visit the merchant's site to review and verify product information, price, and shipping costs. GoSale.com is not responsible for the content and opinions contained in customer submitted reviews.

Find similar products to the Timeshift