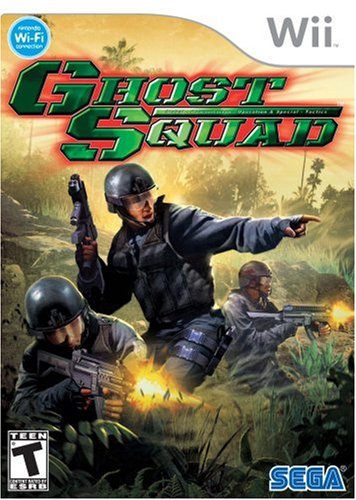 Features:Product Description
SEGA's top-grossing light gun game, Ghost Squad, comes to the Wii system and replicates the excitement of the arcade experience in your home! The Ghost Squad is a Special Forces unit established in strict secrecy by the U.N. to combat terrorism and carry out special highly-classified missions without leaving a trace. As an elite member of the Ghost Squad, players will complete dangerous missions such as eliminating terrorist groups, releasing hostages, deactivating bombs, and even rescuing the U.S. President when terrorists hijack Air Force One! Using the Wii Remote, players will utilize revolutionary selectable weapons including a high-powered rifle, submachine gun and shotgun, or even engage in hand-to-hand combat. Features: Unlock 25 different tactical weapons including sniper and assault rifles, submachine guns, handguns, and more. Ghost Squad operatives on missions in complete darkness will utilize night vision, thermo vision and a flashlight to ensure that the operation is a success.

Last updated: September 23, 2020 at 16:32 EST. Pricing information is provided by the listed merchants. GoSale.com is not responsible for the accuracy of pricing information, product information or the images provided. Product prices and availability is subject to change. Any price and availability information displayed on amazon.com or other merchants at the time of purchase will apply to the purchase of the product. As always, be sure to visit the merchant's site to review and verify product information, price, and shipping costs. GoSale.com is not responsible for the content and opinions contained in customer submitted reviews.